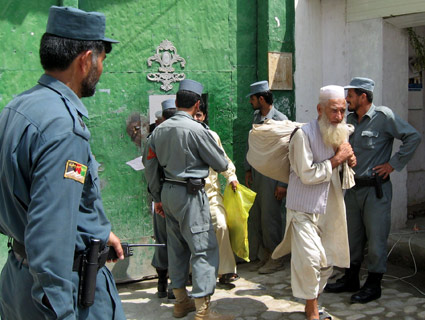 The report found evidence of “a compelling pattern and practice of systematic torture and ill-treatment” during interrogation in the accounts of nearly half of the detainees of the intelligence service, known as the National Directorate of Intelligence, who were interviewed by United Nations researchers. The national police treatment of detainees was somewhat less severe and widespread, the report found. Its research covered 47 facilities sites in 22 provinces. “Use of interrogation methods, including suspension, beatings, electric shock, stress positions and threatened sexual assault is unacceptable by any standard of international human rights law,” the report said.

It was unclear from the report whether any information extracted under torture was used by either the Afghan government or its foreign military allies. One detainee described being brought in for interrogation in Kandahar and having the interrogator ask if he knew the name of the office and then, after the man answered, “You should confess what you have done in the past as Taliban—even stones confess here.”

The man was beaten over several days for hours at a time with electric wire and then signed a confession, the report said.

The Afghan government has admitted that, thanks to years of war, suicide bombings, and other acts of terrorism, “deficiencies” remain in its security protocols. The government also insists that it has brought in a special unit to look into the torture allegations, and already fired several employees at one of the most problematic units. After reviewing an early version of the UN’s report in September, NATO officials halted all prisoner transfers to the sixteen facilities suspected of employing abusive practices.

These revelations could also trigger the Leahy amendment, a provision that prevents the US from offering certain forms of military assistance to foreign entities that commit rampant human rights violations. But it’s not clear if this will get that far. Political pressure to reduce the size of the American footprint in the region has made American overseers loathe to entangle themselves in thorny issues like prisoner abuse. Trying to tackle the serious problems of Afghan prisons, it seems, doesn’t fit into the plan.