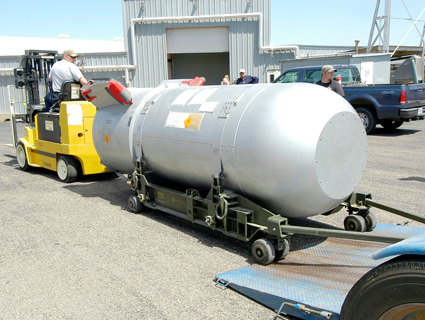 The United States’ ability to annihilate millions of people at a time is a little weaker than it was last week. The agency in charge of America’s nuclear arsenal announced Tuesday that it’s finished dismantling the country’s oldest, biggest A-bomb, the B53.

The disassembly, detailed in the government video below, “is a major accomplishment that has made the world safer and for which everyone involved should be proud,” Deputy Energy Secretary Daniel Poneman said in a statement. “Safely and securely dismantling surplus weapons is a critical step along the road to achieving President Obama’s vision of a world without nuclear weapons.”

Obama vowed to do away with nukes in a Prague speech in April 2009, and the past week has seen some encouraging moves in that direction. Last Friday, authorities announced they had dismantled the final remnants of the W70, a “tactical” nuclear missile program designed for use by small artillery units—the sort of regiments that might roam the countryside of Central Europe in a US-Soviet war that never materialized.

But no disarmament program has been as big, literally, as the elimination of the final B53. A bunker-buster described by the government as “the size of a minivan and approximately 10,000 pounds,” the nine-megaton bomb had the highest explosive yield of any US weapon, 600 times stronger than the one dropped on Hiroshima. When tested on Enewetak Atoll in 1952, it caused lifelong health problems in islanders 140 miles away. According to DOD research from the ’70s, if a B53 were dropped on a population center, anyone within an 18-mile radius would have died immediately of burns; every structure within nine miles would likely be leveled. Its blast would have been nearly the same size as this test shot off Bikini Atoll, the 11-megaton “Castle Romeo” explosion in 1954:

Hans Kristenson, the Federation of American Scientists’ resident expert on nuclear weapons, told Wired this week that the B53’s retirement signals “the end of the era of monster weapons.”

Maybe so, but it’s unclear just how much safer the dismantlements leave us. As the government’s press releases note, the W70 and B53 radioactive pits will remain intact, in storage at the nation’s contractor-run Pantex nuclear weapons assembly plant outside Amarillo, Texas; there, they’ll await final destruction, along with thousands of other backlogged radioactive cores. They could conceivably be restored, along with thousands of “zombified” nukes.

Who could be for such a thing? Stay tuned to find out. In the meantime, watch how a big bomb gets retired: