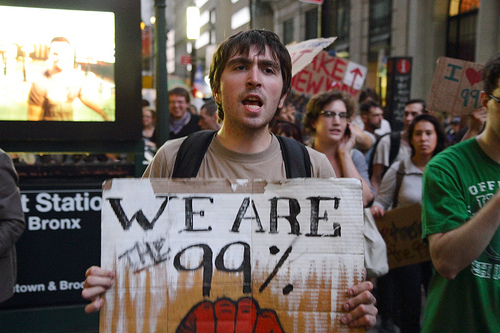 Adbusters, the Canadian anti-capitalist magazine that helped spark Occupy Wall Street, suggests in a new “tactical briefing” on its blog that protesters in lower Manhattan “declare ‘victory'” and wind down the occupation for the winter, letting the “diehards” hold what’s been a site of constant protests for nearly two months.

The magazine’s advice came a day before New York police officers raided and cleared out Zuccotti Park, the beating heart of OWS, at the order of Mayor Michael Bloomberg. Authorities arrested nearly 200 protesters.

In July, Adbusters put out a call on its website to “flood into lower Manhattan, set up tents, kitchens, peaceful barricades, and occupy Wall Street.” The magazine asked, “Are you ready for a Tahrir moment?” That call, in combination with months of discussion and organizing by an international cast of artists, activists, students, and more, gave rise to Occupy Wall Street on September 17th, a protest that spawned spin-off occupations around the world and shifted the debate in the US.

Adbusters‘ call to declare victory is one of two “strategies” the magazine lays out for OWS protesters:

STRATEGY #1: We summon our strength, grit our teeth and hang in there through winter … heroically we sleep in the snow … we impress the world with our determination and guts … and when the cops come, we put our bodies on the line and resist them nonviolently with everything we’ve got.

STRATEGY #2: We declare “victory” and throw a party … a festival … a potlatch … a jubilee … a grand gesture to celebrate, commemorate, rejoice in how far we’ve come, the comrades we’ve made, the glorious days ahead. Imagine, on a Saturday yet to be announced, perhaps our movement’s three month anniversary on December 17, in every #OCCUPY in the world, we reclaim the streets for a weekend of triumphant hilarity and joyous revelry.

We dance like we’ve never danced before and invite the world to join us.

Then we clean up, scale back and most of us go indoors while the die-hards hold the camps. We use the winter to brainstorm, network, build momentum so that we may emerge rejuvenated with fresh tactics, philosophies, and a myriad projects ready to rumble next Spring.

Whatever we do, let’s keep our revolutionary spirit alive … let’s never stop living without dead time.

for the wild,
Culture Jammers HQ

In the wake of the NYPD raid, Occupy Wall Street’s fate remains unclear. A Manhattan judge issued a signed court order permitting protesters to return to Zuccotti Park with their encampment gear. However, by late morning on Tuesday, police continued to block off the the park to the public.