Adaptation is fundamental for a species to survive, especially in hostile environments like the Arctic. When faced with six months of perpetual darkness where snow and ice lay claim to every inch of the land, which animals are capable of surviving, and how do they do it?

During winter in the Arctic, temperatures can drop to a bone-chilling -50°C (-58°F). Rather than going into hibernation, however, some animals stick out the winter, using their cold-conquering adaptations to survive. One such animal that has done this is the arctic fox, more commonly known as the snow fox.

Across the arctic and alpine tundra, these jackals of the north—so-called because of their propensity to scavenge on polar bears’ kills—have a woolly coat with the best insulating properties of any mammal. The fox also has small, heavily furred ears, and a short nose that enable the species to adapt to extreme arctic conditions. Their small surface area make them less prone to heat loss, while increased blood circulation and fur on the soles of their feet prevent their paws from freezing.

Another such master of retaining body heat: the walrus. 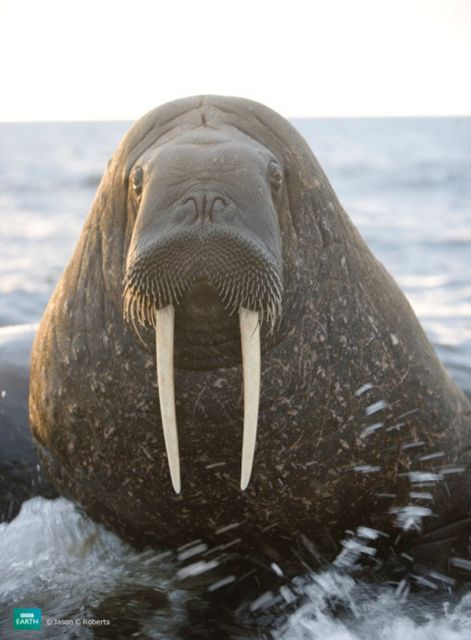 Walruses are covered with short, coarse hair that becomes less dense with age. Their skin is folded and wrinkled and can grow up to 4-cm thick, serving as a great insulator. The skin is thickest on the neck and shoulders of adult males, and they serve a defensive purpose—resisting tusk penetration when two bulls spar, for example.

Walruses also have a deposit of fatty tissue up to 15 cm (6 inches) thick—and may make up up to a third of their body mass in winter. The tissue also streamlines the body and is used as an energy reserve.

These outer defenses serve as a pretty strong armor. But even the thickest of a walrus’ “winter coat” is not sufficient when diving to depths of over 180 meters (590 feet) for nearly half an hour at a time. When entering the cold arctic water, walruses also have an internal mechanism that restricts blood flow to the skin in order to reduce heat loss, giving them a paler appearance underwater. Conversely, when walruses are warm their skin is flushed with blood and they appear to be very red.

The adaptations that allow animals to live in such a hostile environment are incredible; join us again when we explore adaptations even more extreme—those of the animals who inhabit the Antarctic, the coldest place on earth.