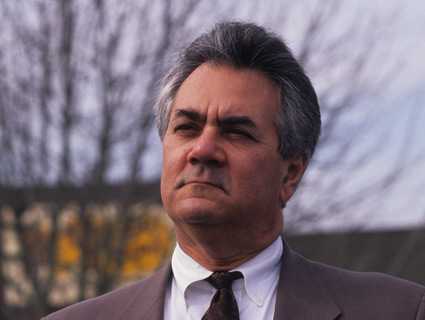 On Monday, Representative Barney Frank (D-Mass.) made the surprise announcement that he will not seek reelection in 2012. A liberal stalwart who was first elected to Congress at the dawn of the Reagan era, Frank rose to become the chairman of the House Financial Services Committee from 2007-11 and was a key author of the Dodd–Frank Wall Street Reform and Consumer Protection Act, the regulatory overhaul signed into law in July 2010.

Admired for his barbed wit and pugilistic approach to politics, Frank was attacked by conservatives for his pre-housing crisis relationship with Fannie and Freddie and his views on taxation and Wall Street regulation. (Frank’s departure, however, will not leave the right without a regulatory bogeyman—once he retires, California congresswoman Maxine Waters will be the most-senior Democrat on the Financial Services Committee.)

Here’s a collection of both Frank’s greatest hits and some of his most cringe-worthy fumbles.

There are plenty of politicians who have heated ideological disagreements but can still smile and play golf together. Newt Gingrich and Barney Frank don’t have that luxury. Long before the 2012 Republican presidential contender said it was a good idea to throw Frank in jail for “put[ting] this country in trouble,” the two were already busy hating on everything the other stood for. Along with making it abundantly clear that he “despise[s] Gingrich because of the negative effect he has had on American politics,” Frank had the following to say about the then-House Speaker during a 1995 interview with Mother Jones:

That’s why [Gingrich] says so many wrong things: He doesn’t know a lot about substance. He half-reads some future-oriented books and out of that comes a gabble that’s not terribly coherent…[H]e’s a mechanic of power.

More than 16 years later, the mutual animosity show little sign of cooling off—Frank even made sure to work a couple Gingrich-related zingers into the Monday afternoon press conference announcing his retirement.

Frank occasionally found common ground with politicians like Ron Paul on some pet causes. Here’s one of them:

Here’s an instant classic from Summer 2009 in which Frank confronts a heckler:

It is a tribute to the First Amendment that this kind of vile, contemptible nonsense is so freely propagated.

Two weeks after the 2004 presidential election, Rep. Frank had this to say about the role of “moderate Republicans” in the House:

Republicans will be with us as long as their votes are irrelevant to the outcome…Moderate Republicans are reverse Houdinis. They tie themselves up in knots and then tell you they can’t do anything because they’re tied up in knots.

I rule out that it was an innocent mispronunciation. I turned to my own expert, my mother, who reports that in 59 years of marriage, no one ever introduced her as Elsie Fag.

This was in response to then-House Majority Leader Dick Armey’s claim that referring to Frank as “Barney Fag” during a press event was nothing more than “trouble with alliteration.” Frank was the first openly gay member of Congress.

Okay, he really could’ve called this one better:

2) The congressman and the Ivy League young conservative

A predictable by-product of Frank’s blunt humor and professional brusqueness was his routine rudeness to journalists, colleagues, constituents, and people who calmly asked him questions.

3) Sticking it to the 1 percent before it was cool

The underlying message is all well and good, but there was probably a more nimble way of phrasing this—something that wouldn’t have made it so easy for conservatives to holler “radical socialist agenda domination ahead!”: