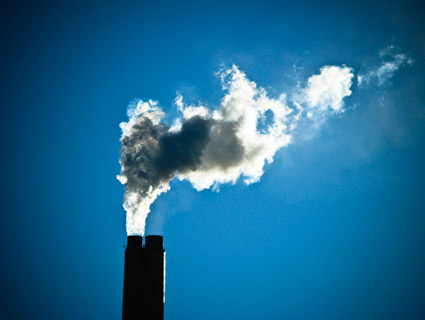 Stronger national standards on fine particulate matter could prevent 35,700 premature deaths and save Americans $281 billion per year, according to a new report. Earth Justice, the American Lung Association, and Clean Air Task Force published the report in conjunction with a petition they filed yesterday (PDF) against the Environmental Protection Agency for failing to meet its deadline to revisit the standard.

Fine particulate matter (otherwise known as PM 2.5 or more commonly as soot) is a mixture of solid and liquid particles that derives largely from diesel vehicles and equipent as well as coal-fired power plants. Soot is formed when tailpipe and smokestack emissions—including sulfur dioxide and nitrogen oxides (both of which are classified as hazardous under the Clean Air Act)—mix with other chemicals in the atmosphere.

While not considered a hazardous pollutant by EPA standards, there’s been a growing amount of scientific evidence supporting PM 2.5’s health risks, including respiratory and heart diseases, aggravation of asthma, and diabetes. PM 2.5 is so fine (about 1/30 the width of a human hair) that it bypasses our usual mechanisms to dispel irritating air particles, like coughing and sneezing. Even just a few hours of exposure can aggravate lung disease, asthma attacks, or acute bronchitis, the report’s authors say. Exposure has led to incidents of missing school and work, and even emergency visits to the hospital.

The report, citing previous studies, says that children are highly vulnerable to getting sick from PM 2.5 because much of their respiratory systems are still developing, and because they spend more time outdoors than do adults. The report also points out that elders and diabetics—who are more prone to heart or lung disease—are at risk, as are low-income groups, which “often live closer to the sources of soot pollution and have less access to medical care.”

Given these findings over recent years, the report’s authors argue that the EPA should save lives and money by strengthening its standard without further delay. The EPA, which is mandated under the Clean Air Act to revise pollutant standards every five years, last set its standard for PM 2.5 in October 2006—and is now a month overdue for revision. The environmental groups behind the report and the petition are now asking the courts to impose a September 2012 deadline for the EPA to come up with the new standard.

The general onslaught of recent Congressional action to undercut the EPA’s authority to regulate under the Clean Air Act might help to explain the agency’s delays in standard setting. According to an August 2011 Congressional Research Service report (PDF), there are at least six EPA regulations currently under consideration that would impose tougher air pollution standards on coal-fired power plants. The proposed regulations are being met with strong resistance from electric utility groups, Edison Electric Institute (EEI) chief among them, which calls the EPA’s proposals a “regulatory train wreck.” The National Mining Association and the American Legislative Exchange Council, an influential lobbying group, have similarly criticized the EPA proposals.

The primary anti-EPA regulation argument touted by industry, of course, is related to cost. One of the proposals under consideration, the Utility Maximum Achievable Control Technology, would require power plants to install better scrubbing and filtering equipment. Industry groups like EEI have argued that such a regulation could impede electric generating capacity and system reliability. According to the CRS analysis, however, many of the industry impact assessments grossly inflate the EPA’s own estimated costs of compliance. For example, the EPA projects that complying with the Utility MACT proposal would cost the industry about $10.9 billion annually, while the average consumer would see bills go up by about $3 to $4 per month.

This cost to industry might be sizeable. But compare that with the estimated $218 billion Americans could save in health costs just with a stronger standard on soot? You do the math.