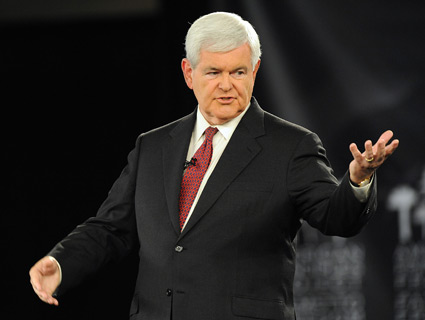 Newt Gingrich has had a tough time during this presidential campaign discussing the individual mandate. Republicans—especially tea partiers—tend to consider the individual mandate (which compels people to obtain health insurance) the worst part of President Barack Obama’s health care overhaul. For them, it is a symbol of Obama’s big-government, anti-freedom, socialistic ways. And Gingrich has been tap-dancing around this issue for months. Last May, he said he supported “some requirement” to “have insurance,” but quickly afterward issued a campaign video declaring he was “completely opposed to the Obamacare mandate on individuals.” In a recent debate, he acknowledged that he had endorsed the individual mandate in the early 1990s, but claimed he had done so only as a tactical maneuver in opposition to Hillary Clinton’s health care proposal at the time. The clear implication: that was then, now I don’t. But yesterday, I reported that his for-profit health policy outfit, the Center for Health Transformation, has for years pushed a health care plan that would, according to the group’s website, “require that anyone who earms more than $50,000 a year must purchase health insurance or post a bond.” In other words, an individual mandate.

Gingrich’s campaign did not respond to a request for an explanation. I suppose he could say that he did not agree with all the policies of his own center or that the mandate envisioned by this proposal would be a state-imposed obligation, not a federally imposed one (such as the “Obamacare mandate” Gingrich so fervently opposes). But a 2007 column he posted on the Center’s website affords him no wiggle room whatsoever. In that article, Gingrich wrote,

In order to make coverage more accessible, Congress must do more, including passing legislation to: establish a national health insurance marketplace by giving individuals the freedom to shop for insurance plans across state lines; provide low-income families with $1,000 in direct contributions to a health savings account, along with a $2,000 advanced tax credit to purchase an HSA-eligible high-deductible health plan; make premiums for these plans tax deductible; provide tax rebates to small businesses that contribute to their employees’ HSAs; extend and expand grant funding to high-risk pools across the country; and require anyone who earns more than $50,000 a year to purchase health insurance or post a bond. [Emphasis added.]

My, my. Gingrich, under his own byline, was calling for Congress to impose an “Obamacare”-like federal mandate on individuals throughout the land. There’s no way he can talk—or even lie—himself out of this.