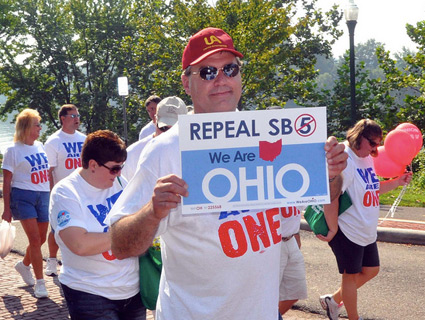 It’s Sunday evening at New Bethel Baptist Church, an 87-year-old institution on the southwest side of Youngstown, Ohio. Outside, the neighborhood is still and dark, the intersection of Hillman Street and W. Marion Avenue lit only by New Bethel’s glowing sign. But inside the pews are mostly filled with men and women and children, nearly all African American, some in their Sunday best, others in T-shirts and jeans, all of them ready for the evening’s gospel.

And the gospel is politics. It’s voting. It’s Issue 2, the ballot referendum to uphold or repeal Gov. John Kasich’s law curbing collective-bargaining rights for 350,000 public workers, including cops, firefighters, teachers, and nurses. Election Day is just 36 hours away. The evening service at New Bethel is just one of dozens of similar get-out-the-vote rallies that have taken place all over Youngstown over the past week.

The first speaker is Matreece Waters, a dreadlocked young man studying finance at nearby Youngstown State University. Youngstown, he says, gets a bad rap. People want to talk about the crime, the murders, the economic prosperity slowly leeched out of the city.

Waters thinks otherwise. “Youngstown,” he insists, “is a breeding ground for great people.”

Waters brings up Genesis 11 and the Tower of Babel, when the people of the earth used “brick for stone” and “tar for mortar” and worked together to build a tower “whose top will reach into heaven.” The people rallied around that tower, built it together, a common religious center for them all. The November 8 vote, Waters says, must be the tower for the people of Youngstown. “On this November 8 we have the chance to get everyone to focus on one thing, one vote, that can make the difference.”

State Sen. Nina Turner, a Democrat, is next. A frequent guest on liberal firebrand Ed Schultz’s shows, Turner wears a black dress, black-rimmed eyeglasses, black heels, and pearls. Turner is dynamic, electric, her resounding alto leaving the audience rapt. November 8 is “a day of reckoning,” she says, and “one of the biggest showdowns of our time.”

Turner recounts the story of the search for Jesus by his parents. When they find him, Turner says, he is surrounded by Jerusalem’s religious scholars, all of them leaning in to hear the young boy’s wisdom. And when Jesus’ parents ask why he had left them, Jesus replies, “Why did you seek me? Did you not know that I must be about my father’s business?”

“Unh!” “We will!” By now the crowd is on its feet, hands aloft, feet stomping, applause deafening.

“The power is in our hands, sisters and brothers. We will have the final say on November the 8th. Show up, show down, and show how!”

The evening ends with a video of Reverend Al Sharpton speaking at an Ohio Legislative Black Caucus gala in late October. His recorded voice carries through the walls into the still quiet night. “It’s not about Obama; it’s about your momma!” he roars.

When the lights come back on inside New Bethel, everyone is on their feet. Pulses race and women wave their wide-brimmed hats like fans. Reverend Georgina Thornton takes to the pulpit and leads everyone in a final prayer. It ends: “May Tuesday be the day the Lord has made; may we be able to rejoice and celebrate in it.”

I meet Hattie Wilkins, 61, a Youngstown resident, as she slowly heads for the exit once the service ends. Under her Steelers jacket, Wilkins wears an Ohio Unity Coalition T-shirt that reads, “When We Vote…We Win!” Wilkins tells me she’s been canvassing for weeks in the runup to November 8, correcting misinformation and urging residents of Youngstown’s tougher neighborhoods to cast their vote to repeal the governor’s anti-union law.

“I was on Sherwood Avenue,” she tells me, “over there on the south side, and these two guys come up to me. They asked me was I strappin’?”

“You know, strapping a gun. Concealed carry. For protection. This wasn’t the safest neighborhood.”