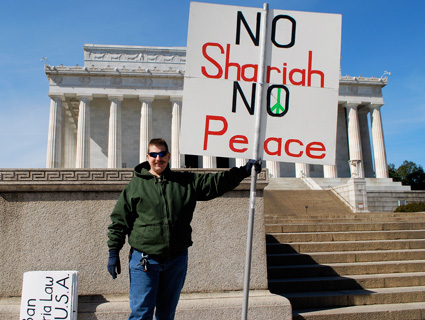 If Florida Republicans are looking for the most conservative candidate possible to take on Democratic Sen. Bill Nelson next November, Adam Hasner is probably not their guy. The former Florida House Majority Leader cosponsored cap-and-trade legislation in 2008 and once received an F rating from the Christian Coalition of Florida. His old campaign literature touted his opposition to school vouchers as proof of his “moderate” views.

But recently Hasner has become a contender in the race for the Republican nomination, and his popularity among conservatives can be attributed in no small part to his embrace of a particular issue: the supposedly creeping threat of radical Islam in America. Since 9/11, Florida has become a hotbed for anti-Islam think tanks and activists groups, and Hasner has emerged as a shining knight for them.

“You cannot fight an enemy when you will not acknowledge that an enemy even exists, and that enemy has a name, and that is Shariah-compliant Islam,” Hasner told a local 9/12 group in March. “We cannot allow political correctness and multiculturalism or appeasement cripple our defenses at home or abroad.”

Hasner’s is hardly a household name outside of South Florida, but he may have a puncher’s chance of making it to Washington. A recent poll put Nelson’s favorability ratings at less than 50 percent, making the two-term senator vulnerable. If Hasner can pull off a victory in the GOP primary and go on to defeat Nelson, he’ll be in a position to give the anti-Shariah movement a larger megaphone. Hasner’s embrace of Islam as a political bludgeon is noteworthy for the intraparty shift it represents from just a decade ago, when Muslim groups in South Florida claimed credit for pushing George W. Bush over the top in the state.

Hasner’s involvement in the anti-Shariah industry began with a movie. In 2007, when he was still a Republican state representative from Broward County, Hasner, along with a Florida activist named Tom Trento, wanted to hold a screening of the film Obsession (below), a documentary that proposes to detail plans by Islamic extremists to take over the world and enslave the West. (In 2008, just before the presidential election, the film was distributed free to 28 million households by the right-wing Clarion Fund.)

To stage the event, they formed a nonprofit group called the Florida Security Council (FSC). The plan, as Hasner explained later, was to educate fellow lawmakers on the threat posed by “Shariah-compliant Islam” in the United States. They rented out an IMAX in Tallahassee and invited Frank Gaffney, the former Reagan Defense Department official who’s viewed as something of an oracle among the anti-Shariah crowd, to speak to the group.

The FSC later changed its name to United West, apparently in hopes of becoming more widely influential. Hasner, who touts the formation of the group as one of his major career accomplishments, was never officially a member of the organization in any leadership capacity—but he was a big ally for the group in Tallahassee.

Consider, for instance, his involvement in the case of Parvez Ahmed. Ahmed, a finance professor at the University of North Florida in Jacksonville, was appointed to serve on the city’s Human rights Commission by the Republican mayor in 2010. It was a fairly ordinary municipal appointment, until Hasner got involved.

Even though Hasner’s own district was located more than 300 miles away in Boca Raton, he took an interest in Ahmed’s past, which included serving as president of the Florida chapter of the Council on American–Islamic Relations (CAIR). Hasner reached out to at least two city council members, as well as a state representative from the area, and warned them that Ahmed had extremist ties. As one city councilman told the Jacksonville Times–Union, “He just encouraged me to dig into the situation and just do some research on it because there may be some genuine concerns.” Other activists pointed to a 2007 paper in which, they claimed, Ahmed justified terrorism. (In that paper Ahmed also called such acts “abhorrent.”)

Hasner invited Dutch politician Geert Wilders, who has called for the Koran to be banned, to speak.

It wasn’t the first time Hasner had attempted to stir suspicion in this fashion. In 2009, he made headlines when he sent out an email to Jewish lobbyists warning them about a planned Muslim Day at the Florida capitol being put on by a group called United Voices for America. “There is still a lot of information that we don’t know, including what they intend to do during their time in Tallahassee,” he wrote. “It is expected that they are going to attempt to push back on the Israel solidarity Resolution that I sponsored earlier this year.” Hasner also held a press conference on the steps of the capitol to raise his concerns about Ahmed Bedier, the group’s founder, who in the past had worked with CAIR.

United Voices’ lobbying, says its founder, focused on a range of less controversial issues, including education funding. “It had nothing to do with religion, nothing to do with Muslims or Shariah or anything like that,” Bedier says. The point, he explains, was to “introduce them to the political process and at the same time expose lawmakers to a group they normally don’t engage.” Moreover, Bedier notes, the group that visited Tallahassee that day was an interfaith coalition.

One month later, Hasner boycotted an appearance by Tampa Imam Qasim Ahmed, who delivered the opening prayer in the House chamber—a one-man stand Hasner now mentions in his stump speech. That same month, Hasner helped back a screening of the anti-Islam film Fitna at the Renaissance Hotel in Boca Raton, and invited Dutch politician Geert Wilders, who has called for the Koran to be banned, to speak. “[Islam] is not a religion; it is a totalitarian ideology,” Wilders told the crowd.

Hasner’s anti-Islam activism makes him a good fit for Florida conservatives. Over the last three years activists there have mobilized against the perceived threat of Islamic law in state courts and the specter of stealth Islamists infiltrating American politics. Pamela Geller’s Stop Islamization of America, based in New York City, has a chapter in Florida. United West, Trento’s group, is based out of Lake Worth, Florida. Brigette Gabriel’s Act! For America is headquartered in Pensacola. Citizens for National Security, which held a briefing on Capitol Hill in July to declare that it has a secret list of 6,000 American members of the Muslim Brotherhood, is based out of Boca Raton. And Allen West, a Republican Congressman who has stated that Islam is not a religion, represents West Palm Beach.

Part of the reason the issue is so pronounced comes down to demographics. The region has a high Jewish population and a very high, disproportionately immigrant-based, Muslim population. And the Muslim community of South Florida has had notable blemishes: In 2003, Sami al-Arian, a computer engineering professor at the University of South Florida, was indicted by the federal government on charges of material support for terrorism. (The controversial 17-count indictment ended in a deal with Arian pleading guilty to one count of providing services to a terrorist organization; he is currently under house arrest.) Last May, three Pakistani American men—two of whom were imams in Miami—were indicted on charges of conspiring to aid the Taliban (they’re still awaiting trial). For figures like Hasner and Trento, those incidents are validation for stoking fears of a widespread threat.

Hasner’s anti-Shariah campaign has given him credibility with tea party groups, but it could also leave him vulnerable among more establishment Republicans. At a June tea party event in Fort Lauderdale, Hasner shared a stage with Geller, who praised the candidate—and then went on to call GOP luminary Grover Norquist “dangerous” with regard to radical Islam, also referring to him on her blog as a “stealth jihadist.” (Norquist has said that Republicans need to “knock that stuff down and just make it clear that there’s no place for that in the party of Reagan.”) If Hasner thought Geller went a step too far, he kept it to himself, and he praised Geller during his own speech.

Hasner’s campaign declined to comment about Norquist or offer specifics as to how the candidate might act on his concerns about radical Islam if elected to the Senate. But in a statement, spokesman Doug Mayer reiterated the candidate’s message: “The tenets of Sharia law are not only authoritarian in nature but they are incompatible with the U.S. Constitution,” he said. “Adam is unapologetic in his defense of our liberty and will continue to speak out against the pervasive dangers of Islamic terrorism.”