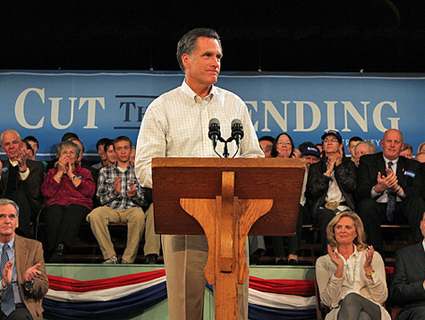 On November 3, at a town hall event in Exeter, New Hampshire, Republican presidential hopeful Mitt Romney laid out his plan to make the federal government “smaller, simpler, smarter.” As president, Romney would slash spending, root out waste, and balance the federal budget—to do otherwise, he said, would push the country to the brink of collapse. “If we keep spending like we’re spending, and borrowing like we’re borrowing, at some point we could face what Greece faces,” he warned. Behind Romney as he spoke hung a bright blue banner: “CUT THE SPENDING.”

Not long ago, however, he took a much different view of federal spending. Far from decrying Washington’s spendthrift ways, Romney, as governor of Massachusetts, sought to position his state to hoover up every federal dollar it could—and to use that money to help solve a state budget crisis.

According to memos, emails, and other records now housed in the state archives, the Romney administration made the pursuit of federal funding a top priority, establishing a federal grants office to scour for opportunities and bolstering its presence in DC by retaining a powerful lobbying shop for help. Internal documents show the administration bemoaning its low ranking in an annual “pork list” detailing which states brought home the most federal bacon, and aggressively planning to boost that ranking. Which they did: Between 2003, when Romney took office, and 2006, Massachusetts climbed as high as nine spots in the pork rankings.

That Romney once coveted the spending he now denounces reinforces his image as a politician whose positions change with the political headwinds, say political scientists. It could also further alienate him from a Republican Party that has swung further to the right and from die-hard conservative voters who, in large numbers, support governors known for rejecting Washington’s money. “It plays into the theme that both Republicans and the Obama White House are using against Mitt Romney: the flip-flopping,” says Larry Sabato, director of the University of Virginia’s Center for Politics. “It’s the hypocrisy angle to the flip-flop charge.”

Romney’s federal spending flip-flop dates back to his first presidential run in 2008, when he railed against the same earmarks he pursued as governor. “As President, I pledge to use every available method to eliminate wasteful earmarks in the federal budget,” he said in a December 21, 2007, press release. “Change in Washington begins when we change the culture that allows earmarks, pet projects and wasteful spending to thrive in the place of being good fiscal stewards of the taxpayers’ money.” (A Romney spokeswoman didn’t respond to multiple requests for comment.)

As a candidate, Romney often boasts of closing a $3 billion budget deficit without borrowing money or raising taxes. Never does he mention his push to rake in federal dollars, which began near the start of his governorship. On May 8, 2003, four months after he took office, he unveiled his “Tapping Our Potential” (TOP) plan to a crowd at the Greater Boston Chamber of Commerce. Reeling in more money from Washington was front and center in his plan to jump-start Massachusetts’ economy.

Romney’s federal spending strategy caught the eye of at least one high-powered lobbyist. In a letter to Romney after the Chamber speech, Deirdre Phillips, the top lobbyist for FleetBoston Financial, wrote, “I was particularly struck when you talked about going after funding from Washington.” Phillips urged Romney to team up with FleetBoston and other Boston companies who could “carry your message” in Washington. (Phillips, now executive director of the Autism Consortium, wrote in an email that her letter “speaks for itself.”)

A few weeks later, the Romney administration rolled out a new “federal grants advocacy center” devoted to securing more federal money. According to an internal memo sent by Gayl Mileszko, a Romney aide, to top agency heads and the governor’s office, the new center would ramp Massachusetts’ share of federal grant money doled out each year. Running the new center would be the director of Massachusetts’ DC office, Frank Micciche, now a lobbyist at the McKenna Long & Aldridge law firm. (Mileszko and Micciche both declined to comment.)

A July 1, 2003, planning email from Mileszko stressed Romney’s “personal interest and commitment” to bringing in more federal grants. On July 2, 2003, Cindy Gillespie, then Romney’s chief of legislative and intergovernmental affairs, penned a memo titled “Objective: Increase Federal Funds to Massachusetts.” The first sentence reads, “A major priority of our Administration is to ensure that Massachusetts receives the maximum amount of dollars available from the federal government.” Gillespie goes on to say that Romney and Lt. Gov. Kerry Healey would coordinate with cabinet secretaries on the announcements and promotion of new federal funds received by the state.

A gaping budget deficit wasn’t the lone driver behind the state’s campaign for more federal money. A list of talking points, dated August 25, 2003, shows that Romney aides believed the state wasn’t getting its “fair share” of Washington’s largesse. The document cites a list compiled by the good-government group Citizens Against Government Waste, outlining how much “pork-barrel” spending states received in 2003, when Massachusetts ranked 48th of 51, with an average of $16.65 per resident. (The national average was $34.33.) Indeed, the state had ranked near last place for a decade. “Status quo is not working,” the memo reads. “The Commonwealth must be more aggressive in securing and retaining more federal dollars.”

The memo makes clear that Romney played a key role in this effort, which his staffers said would ease the state’s “financial burden.” The memo says, “As the state’s lead salesman, the Governor is committed to pursuing increased funding opportunities in Washington, DC, based on the prioritized needs of agencies.”

In August 2003, the Romney administration enlisted Cassidy & Associates, a powerful DC lobbying firm, to help the state rake in more federal money. (The state had hired Cassidy in December 2002 for help on other issues.) However, an August 21 fax from Romney adviser Tom Lawler urged the administration to dump Cassidy after the firm failed to fulfill its contract. (A spokesman for Cassidy & Associates did not respond to a request for comment.)

Romney’s push paid off. Massachusetts jumped from 48th on Citizens Against Government Waste’s 2003 pork list to 39th in 2004, with federal appropriations increasing from $107.8 million to $120.8 million. Massachusetts held onto 39th again in 2005, bringing in $150.4 million from Washington. In 2006, the state dropped to 46th on the pork list, with its annual haul totaling $116.8 million. (CAGW didn’t release a pork list in 2007, the year Romney left office, because 9 of 11 appropriations bills failed to pass Congress due to a moratorium on earmarks.)

Larry Sabato says Romney’s government spending flip-flop could hurt him more in the fight for the nomination than in the general election. After all, polls show that Republicans favor hard-line conservative governors like Wisconsin’s Scott Walker and Florida’s Rick Scott, both of whom rejected federal transportation funds. “This is a very conservative Republican Party, and they sense a real opportunity to win and they want a true believer,” Sabato says. “That’s why there’s such resistance to Romney.”

Andy Smith, a political scientist at the University of New Hampshire, doubts that Romney’s past zeal for loading up on federal dollars will hurt his standing in New Hampshire. Romney, Smith says, enjoys wide support among the state’s voters, and notes that politicians chasing on pork barrel spending isn’t a problem unique to Romney. “In New Hampshire, his personal favorability ratings and the sense of inevitability is going to be very hard to overcome in the last six weeks,” Smith says. “It’s another one of those things where Romney’s got problems, but so does pretty much everyone who’s had to balance budgets.”