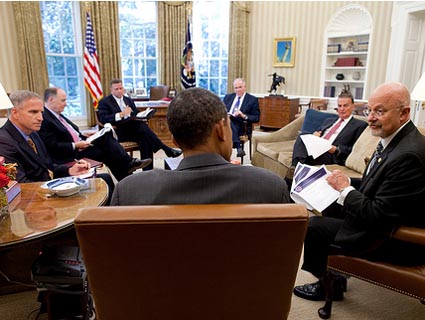 Sure, Rep. Michele Bachmann’s repeated fact-free insinuations that the Obama national security apparatus is being run by civil libertarians are completely false, but this week law enforcement and intelligence professionals and the American Civil Liberties Union are on the same page, at least when it comes to militarizing domestic counterterrorism.

The defense funding bill authorizing domestic indefinite military detention for American citizens suspected of terrorism has come under fire from almost every leading national security official in the administration. All of them have argued that the detention provisions would harm national security:

Now, the convergence between the ACLU and the Obama administration’s national security apparatus has little to do with the ACLU’s influence, it’s just one of those moments where national security officials and civil libertarians happen to see eye-to-eye on something, and not even necessarily for the same reasons. The ACLU doesn’t want the military investigating domestic crimes, and national security officials don’t want to worry about asking permission to continue every time law enforcement starts investigating a suspect. Civil libertarian blogger Marcy Wheeler, however, sees the ACLU as possibly being “in cahoots” with a plan “to give sanction to a broad expansion of Executive war and surveillance powers the likes of which the CIA loves to exploit.”

The key to this supposed plan is an amendment proposed by Senator Mark Udall (D-Colo.) that would strip the offending provisions and force the administration to describe the legal powers it thinks it has when it comes to detaining and prose terrorists. Wheeler argues the Udall amendment “unilaterally reasserts the application of the AUMFs (plural) and other vaguely defined legal bases to detention” and “dictates that detention authority apply to a far broader group of people” than the detention provisions currently in the bill.

The Obama administration’s record on civil liberties has diverged sharply from his campaign promises, so I can sort of understand why Wheeler would be suspicious, but her reading of the Udall amendment is wrong. The point of the language in the amendment is to ensure that the administration reveals all the sources of its authority to Congress. The amendment lists the sources the administration could be drawing its authority from, but that’s not the same as “reaffirming” them. Most crucially, the phrase in the amendment, “Any other statutory or constitutional authority for use of military force” would seem to demand a review of the kind of secret executive branch dictums that authorize things like the targeted killing of American citizens abroad who are suspected of terrorism.

Udall spokesperson Jennifer Talhelm says that the point of the amendment, beyond stripping out the provisions panned by national security officials and civil libertarians alike, is “to understand what the Executive Branch thinks of its current authorities and whether they need to be expanded or reduced or changed,” and that it “does nothing to broaden the scope of detention authority.”

The amendment will probably fail. The Senate isn’t interested in checking executive branch authority beyond addressing the kind of culture-war counterterrorism complaints about “giving rights to terrorists” reflected in the current detention provisions. But neither Udall nor the ACLU are trying to expand executive power here—quite the opposite. They’re trying to make sure it is exercised with some minimal level of transparency and accountability.