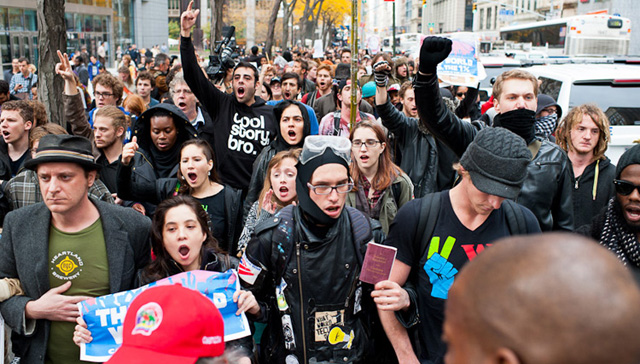 Protesters marched up Broadway on Tuesday. Photo: Jacob BlickenstaffAt 7 a.m. tomorrow, Occupy Wall Street will attempt to live up to its name. Hundreds of activists will converge upon the Street’s most famous address—the New York Stock Exchange—in a coordinated attempt to shut it down. The blockade will be the first protest in a long day of carefully planned demonstrations to mark what would have been the two-month anniversary of the occupation of Zuccotti Park.

“Most of the focus has been to figure out how to take this pretty radical action and figure out how it can help us build our movement and make OWS more accessible,” says Logan Price, a protest organizer. In particular, organizers want to make sure that lingering outrage over the eviction of the occupiers doesn’t lead to violent confrontations with police. “If we aren’t careful those actions can undermine the 99 percent thing.”

To keep that from happening, experts in nonviolent protest techniques held trainings this evening in a nurses’ union office a few blocks from the park. Lisa Fithian, who helped organize the 1999 WTO protests, kicked things off with a series of role playing games. People pretending to be NYSE workers, police, and members of the media offered challenges. The group practiced ways to block off streets and gracefully get arrested.

“Does somebody want to be a cop and come get me?” asked Fithian, who wore a black T-shirt and sneakers. A young woman with curly red hair chased her around the room. Then she demonstrated another approach: As a big guy in dreadlocks rushed her, she slowly backed up and said, “Officer, I’m cooperating!” What was demonstrated by running away? she asked. “Guilt. We are doing something wrong.”

If everything goes according to plan tomorrow, the protesters will sit down, lock arms, and keep enough people out of the NYSE to stop the morning bell. Of course, mass arrests are all but inevitable. Fithian and a representative of the National Lawyers Guild went through how to deal with tear gas, what not to say to police, and how to dress for jail. (Layers. “It could be hot or it could be cold,” she said.)

Practically speaking, protesters expect that the police will do most of the work of blockading the NYSE for them by setting up barricades all over lower Manhattan. A cat-and-mouse game may emerge as police shift choke points in response to new blockades.

The NYSE shutdown is far from the only protest planned for tomorrow. At 3 p.m., protesters will gather at 16 different subway stations throughout NYC’s five boroughs to “listen to a singular story from one of our hardest-hit and most inspirational neighbors,” according to a flyer handed out at the training this evening. Then at Foley Square, just north of Zuccotti, a celebration will kick off at 5 p.m. followed by a “march to our bridges, where we will demand that we get back to work rebuilding our country’s infrastructure,” the flyer explains.

During the training session, Fithian put the protest in context. “Everything that we do is part of patterning a new world,” she said. “When perestroika happened, when the Soviet Union turned to Russia, people said, ‘What did it look like?’ A man went to his wall, took his painting off, turned it upside down, and put it back on the wall. He said, ‘That’s what it was like.’

“And the truth is, we need to do the same thing right now.”