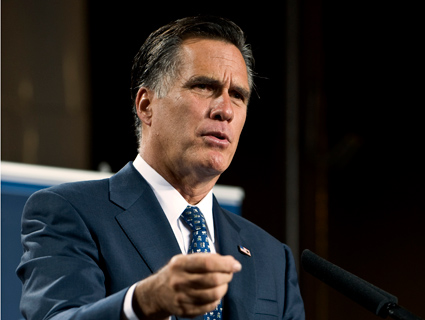 Mitt Romney, the GOP presidential candidate and former Massachusetts governor, has an inconsistent record on laws that would extend "personhood" to fertilized eggs.Brian Cahn/ZUMA

Trying to figure out where Mitt Romney stands on the issues can be difficult. Climate change, gun control, gay rights—the waffling is so bad, there are multiple websites devoted to it.

Now, with a number of states trying to pass laws that would redefine fertilized human eggs as people, Romney has been asked multiple times whether he thinks legal personhood should begin the moment a sperm penetrates an egg. He hasn’t been consistent on the subject.

In 2007, Romney told ABC News he supported a “Human Life Amendment” to the Constitution that would “make it clear that the 14th Amendment’s protections”—equal protection under the law, for example—”apply to unborn children.” The proposed amendment, long a part of the Republican Party platform, is the national equivalent of the state-level personhood measures that have proliferated in recent months. Both the state and federal versions of the proposals would extend legal rights to early term fetuses, effectively making all abortions illegal. Voters in Mississippi considered, and rejected, a ballot initiative on the matter on November 8, but activists recently launched similar efforts in Wisconsin and Georgia.

Supporting such a radical restriction on abortion rights represents a shift for Romney. As a Senate candidate in 1994, he declared, “I believe that abortion should be safe and legal in this country,” and he continued to voice support for Roe v. Wade as governor of Massachusetts. These days, though, Romney says he is “pro-life” and that abortion should be “limited to only instances of rape, incest, or to save the life of the mother.” But the Human Life Amendment he has supported would go much further.

For years, social conservatives have tried and failed to get the two-thirds majority necessary to pass a Human Life Amendment in Congress. Rather than overturning Roe and sending the abortion debate back to the states, the majority of these measures have redefined personhood as beginning at conception—thus extending legal and constitutional rights to fertilized eggs.

The most recent effort on this front is HR 212, Rep. Paul Broun’s (R-Ga.) “Sanctity of Human Life Act.” As Mother Jones’ Nick Baumann has reported, the language of Broun’s bill is nearly identical to Mississippi’s recently defeated personhood amendment, granting “all the legal and constitutional attributes and privileges of personhood” at the point of fertilization. Like the Mississippi amendment, the federal measure would not only outlaw all abortions, but it could also make some types of birth control, in vitro fertilization, and medical interventions for a pregnant woman’s health illegal.

Despite publicly supporting this type of measure in the past, Romney is still trying to play both sides of the issue. In a September debate, Romney was asked explicitly whether he would support a Human Life Amendment. He said he believes that the Supreme Court should return the decision on abortion to the states and promised he would appoint judges who would do just that. As to whether Congress should act to draft a constitutional amendment that includes the unborn, he argued:

That would create obviously a constitutional crisis. Could that happen in this country? Could there be circumstances where that might occur? I think it’s reasonable that something of that nature might happen someday. That’s not something I would precipitate.

The fight over personhood grew much more heated in the weeks following the September debate, and Romney’s position shifted yet again. Asked about personhood during an October television appearance, Romney said that if he had been presented a bill that defined life as beginning at conception while governor of Massachusetts, he “absolutely” would have signed it. He has also made clear that he believes life begins at conception. As Jason Salzman points out on his blog for the Rocky Mountain Media Watch, Romney has flip-flopped repeatedly on this subject. So does Romney support a federal law that defines “personhood” as beginning at conception, or not?

Romney’s team has tried to finesse the issue, arguing that although he endorses a federal Human Life Amendment, he also thinks that that abortion should be a state-level decision.

That’s not a coherent argument. In order to amend the Constitution, two-thirds of Congress and three-quarters of the states must approve the change. That’s a high bar. But after an amendment passes, the states can’t pick and choose which parts of the Constitution they like. If the Constitution were amended to say a fertilized egg is a legal person, state law would have to be brought in line with the new constitutional reality. It would be as if every state had passed the Mississippi personhood amendment.

“Anywhere they give legal rights to and define ‘person’ as beginning at fertilization, you have the ‘personhood’ effect,” explains Alexa Kolbi-Molinas, a staff attorney at the ACLU’s Reproductive Freedom Project.

Such a change would not simply be a reversal of Roe. “If there’s a Human Life Amendment that gives unborn children the rights of people under the 14th Amendment, then it wouldn’t go back to the states,” says Suzanne Novack, a senior staff attorney at the Center for Reproductive Rights. “It would be the law of the land.”

Romney’s flip-flops on personhood don’t help him politically. But they do fit in with the broader goals of personhood advocates. The movement’s measures aren’t likely to pass, and if they did, they would inevitably be challenged in court. But although personhood measures have failed everywhere they’ve been tried so far, the sustained effort has managed to put the issue on the national stage.

Instead of arguing about whether abortion is a woman’s legal right, people are fighting over whether to issue passports to the unborn. “It’s really broadening what the anti-abortion movement is going after and trying to force candidates to go there with them,” Kolbi-Molinas says. For the personhood movement, getting GOP presidential contenders like Romney to weigh in on their issue is a win in itself.