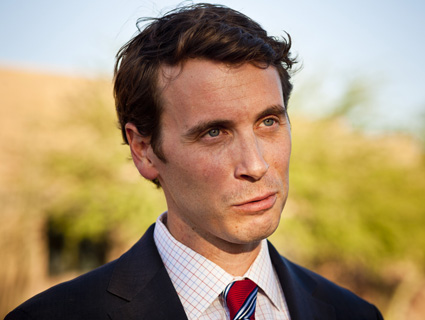 Rep. Ben Quayle, who would be forced to compete with fellow Republican congressman David Schwiekert under the IRC's map. Jack Kurtz/Zuma

On Tuesday, the Arizona Supreme Court is expected to decide whether to temporarily suspend the ouster of Colleen Mathis, the chairwoman of the state’s voter-created Independent Redistricting Commission (IRC). Mathis’ removal, orchestrated by Republican Gov. Jan Brewer, was approved by the state Senate last Tuesday. The court is still considering a lawsuit filed by the IRC challenging Mathis’ removal.

Because the IRC’s electoral map places incumbent Republicans Ben Quayle and David Schwiekert in the same district for the 2012 elections, Brewer complained that the commisssion had intentionally drawn an overly competitive map. She also accused Mathis of violating Arizona’s Open Meetings law, an allegation that is the subject of an ongoing investigation (Brewer chose not to wait for the investigation to finish its work before booting Mathis). According to the IRC’s attorney, the governor’s evidence against Mathis is too thin to warrant a removal, leaving its status pretty murky.

What’s even murkier about the redistricting showdown: The role played by FAIR Trust, a GOP-linked group of attorneys that has coordinated redistricting strategy with state and congressional Republicans. Because it is registered as a legal trust, not a lobbying group, FAIR Trust is permitted to accept anonymous donations and dole that money out with limited disclosure, as the Arizona Capitol-Times‘ Evan Wyloge reported last week.

In the past, FAIR Trust has argued that state lobbying rules don’t apply to its activities. The group contends that since the IRC isn’t a policy-making body, any appeals it makes to the commission aren’t actually lobbying. But there appears to have been a recent change of heart. FAIR Trust formally registered as a lobbyist on October 26, according to recent disclosures:

According to its lobbyist registration, the stated goal is “to ensure compliance with the U.S. Constitution, federal law, the Arizona Constitution and Arizona law in the drafting of congressional and legislative districts.”

FAIR Trust has also consistently avoided disclosing any public information about who it represents and where its financial backing comes from. . . .the group’s new designation doesn’t change much about how little the group will have to tell the public.

“They’re going to have to disclose their expenses and file annual reports,” a Secretary of State representative said.

Financial contributions made to the group and their membership are still able to be kept away from public scrutiny.

An attorney with FAIR Trust wouldn’t comment on other lobbying the group may have done in recent weeks. But he told the Capitol-Times that “the coincidental timing should not infer that FAIR Trust anticipated the Legislature becoming more involved in the redistricting process.”

FAIR Trust should have known that its direct involvement with the IRC would eventually draw heavy scrutiny. According to Democratic IRC member Jose Herrera, FAIR Trust has “been there from day one, attending all of our meetings…They started lobbying the commission in terms of what the lines should look like, what to look out for.” And as the redistricting process heated up, the group began threatening the commission with legal action if it didn’t get what it wanted, Herrera says. The trust “started seeing the writing on the wall, [that the IRC] might be creating competitive maps.”