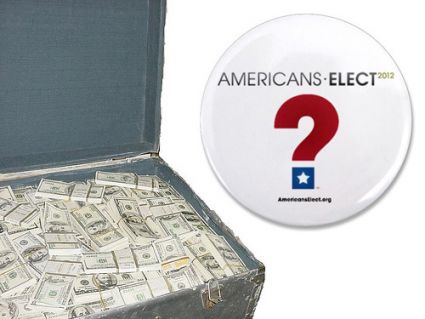 Republican presidential long shot Buddy Roemer is throwing his lot in with Americans Elect, the weird, not-actually-a-third-party-but-come-on political group I wrote about last week. The group’s catchy sell: it will allow registered voters to select a presidential nominee over the internet.

Today I officially announce that I will seek the Americans Elect nomination as a proud Republican but as an even prouder American.

Our country is on the wrong track and Americans are in search of real leadership. Leadership that isn’t predetermined by lobbyists, political parties, or Wall Street executives, but leadership that is free to do what is right for the citizens of our great nation.

Many Americans are unemployed or without health insurance, or both. Some have been foreclosed on or about to be foreclosed on. Sadly, the list goes on and on. From the Tea Party movement to the Occupy Wall Street movement, it is safe to say Americans have lost faith in their government and neither President Obama nor Congress have put aside politics in order to help their fellow Americans.

I will take my message of ending business as usual in Washington directly to the American people. No other candidate is free from the special interests or has the experience I have. I am a former governor, four-term congressman, successful businessman and Harvard-educated economist. And yet, the Republican Party has not allowed me in the debates. Perhaps they don’t like my message about the corrupting influence of money in politics. But, I believe the American people want to hear the message, so I’m going to seek the nomination of Americans Elect which appears eager to welcome diverse and controversial opinions that may upset the status quo.

I will continue to campaign for the Republican nomination and hope to surprise everyone on January 10 in New Hampshire.

Americans Elect wants to upend the political process by allowing registered voters to nominate a presidential ticket that’s beholden to neither party. But it has come under heavy scrutiny for its a shadowy bureaucratic hierarchy and refusal to disclose its donors. How that latter piece squares with Roemer’s criticism of the current, broken campaign finance system is unclear.