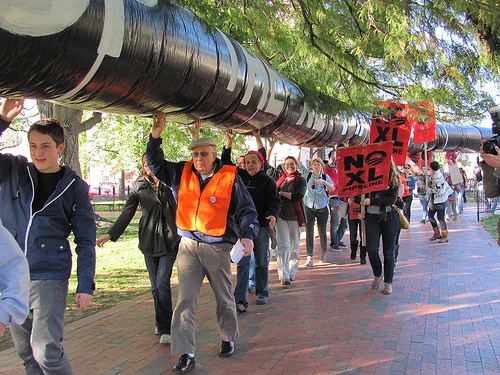 UPDATE: The Senate approved the payroll tax cut bill on Saturday morning, including the Keystone XL rider. It looks like President Obama will not follow through on the veto threat, but a White House official said that the GOP’s insistence on fast-tracking the project is likely to lead to it being rejected.

ORIGINAL POST: Congressional Republicans are going all in for the Keystone XL pipeline—even if it means blocking an extension of the payroll tax cut. I was a bit checked out on this while in Durban covering the climate talks, but Republicans in the House and Senate have decided to demand approval of the pipeline as their fee.

The move would override the White House delay on deciding whether to approve the 1,600-mile pipeline. Instead, the “North American Energy Security Act” they’ve proposed would require that a decision be made within 60 days.

Senate co-sponsor Dick Lugar (R-Ind.) is also touting support for the pipeline that a handful of Senate Democrats have offered (none of which has ever been particularly strong on environmental concerns), though it’s not clear how many of them would side with Republicans against the White House on this. Obama has made it pretty clear that he would veto a bill that included the pipeline directive. At the heart of the pro-pipeline argument is the (thoroughly debunked) claim that the Keystone XL would create tens of thousands of jobs.

Regarding that legislation, Don Stewart, a spokesman for Senate Minority Leader Mitch McConnell emails me with the following statement: “The Leader will not support any bill without the Keystone XL language as part of the agreement.”

House Speaker John Boehner is also insisting that he’ll amend any Senate-passed payroll tax cut bill to add the Keystone provision to it, if it’s not already in there. So Senate Majority Leader Harry Reid and President Obama now have a choice: stick to their guns and object to the provision — at the risk of allowing the payroll tax cut (and unemployment insurance and the Medicare “doc fix”) to expire? Or give in to the GOP.

Now, the thing is, even if the Democrats in Congress and the White House do give in, that doesn’t mean Obama has to approve the pipeline. He just has to make a decision, one way or the other, which is something he’s trying to postpone until after the election. Obama could just go ahead and reject it, which is what his supporters in the environmental community want to see. It’s pretty amazing, however, that the GOP is willing to gum up the works on a totally unrelated bill over the pipeline, even though it could ultimately work against the pipeline.