Herman Cain’s presidential campaign is all but over. The latest Des Moines Register poll puts his support in the critical early caucus state at just 8 percent—down 15 points from last month. Also: He’s been accused of various forms of misconduct by a bipartisan coalition of five different women, ranging from alleged sexual assault to an alleged 13-year extramarital affair, somehow managing to make Newt Gingrich look like a family man in the process.

On Thursday night, Cain told Sean Hannity that he would decide whether or not to quit the race by Monday. On Friday, he decided the timing was perfect to launch a new website, “Women for Herman Cain.” This is the logo:

What is this I don’t even.If that seems like some sort of stock image, it’s because it is. Here’s the exact same shot in an ad for a South African sugar company (“pure sweetness,” I’m told, was a rejected Cain campaign slogan). Here are those four women, in a photo titled “four happy young women with many colorful balloons.” Here are those four same women, with balloons, but without birthday presents: 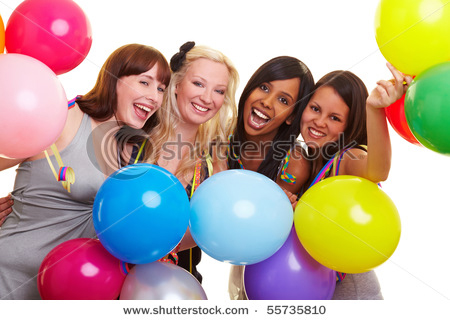 Courtesy of ShutterstockThe fact that these women can summon such enthusiasm for multicollored balloons sort of puts their energetic support for Cain in perspective.

“Dear Mrs. Cain Don’t pay attention to these pathetic husbandless women who are jealous of women like you in happy long-term marriages. These vindictive women can’t find a husband or keep one. They are like stalkers who try to latch on to any man who shows a bit of kindness or attention to them. When these unstable women come out of the woodwork to make accusations about Herman just say, “Honey, get a life, I believe my husband.” We want you to be our First Lady Mrs. Cain!”

You are a triple threat to the Left!! I believe these “women” are looking for money and attention and have been groomed by the “Demonacrats” to be a bunch of bad actress’.

[A]s a REAL woman I do not believe for one second any of these “women” that have crawled out from under a rock somewhere to defame you and bring pain to you and your family. They are pitiful creatures at the very least, and evil at the most. Isn’t it convenient that they have suddenly become offended by supposed advances by you now after all these years, my goodness, poor babies, how have they been able to bare up under the pain for all these oh so many years… LIARS, LIARS, LIARS…GO GET THEM HERMAN AND PLEASE DO NOT QUIT!!!!

Not to quibble, but why is “women” in scare quotes? Does Cheryl know something we don’t?

The “Women for Cain” site isn’t the only questionable content on the Cain site. The main page is also promoting an article which refers to Ginger White, who alleged she recently broke of a 13-year affair with Cain, as a “another loser looking to cash in.” Given that the only other accuser who come forward on her own terms hasn’t cashed in at all, that’s a totally nonsensical statement. (The column doesn’t even rule out the idea that Cain did have a 13-year affair with White.)

Update: Here are a few more, from the Women for Herman Cain sister site, “Encouragement for Herman Cain“: “Mr. Cain, Woodward and Bernstein proved that they could drive a president from office through egregious slander,” writes Sean from Vancouver, Washington. Nixon was set up? Suzanne from Tucson chips in: “I will be praying for Mrs. Cain, so she can grow a thick skin for the future. Please bring her everywhere with you on your campaign from now on. She can only help you. I promise you, your sweet wife vs butch bully Michelle Obama as First Lady — makes it an EASY CHOICE for Americans!!”

Update II: Cain has taken down the stock image, and the proposition that made the entire thing work. Now the site just says “Women [big space] Cain”: