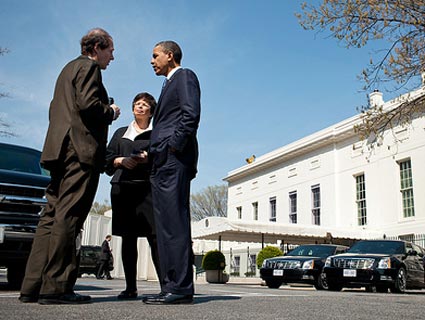 For a while now, Obama’s environmental record has been mixed—at times great, at others shoddy. But a new report (PDF), released Monday from the Center on Progressive Reform (CPR), suggests that when it comes to dismantling environmental reforms, Obama’s administration is actually on par with that of former President George W. Bush. What’s worse, the report shows, is that their combined decade of damage has a common denominator: an elusive federal entity called the Office of Information and Regulatory Affairs (OIRA) that has, under the auspices of both administrations, waged war on environmental, health, and safety protections.

OIRA consists of 55 people, mostly economists, whose main function is to review regulation drafts and proposals from various federal agencies. The office doesn’t get much coverage in the media, but it’s incredibly powerful—reporting right up to the director of the White House’s Office of Management and Budget. In 10 years, OIRA altered a whopping 84 percent of EPA rule submissions, undermining protections that the agency is trying to implement. Citing a number of studies, the report notes that “OIRA almost exclusively weakens agency rules.” When Obama took office, he appointed Harvard Law professor Cass Sunstein—a buddy of his from their days teaching at the University of Chicago Law School—as OIRA’s head. As “regulatory czar,” Sunstein is at the forefront of the government’s rule-making operation—and yet he has a hefty reputation for being anti-regulatory. 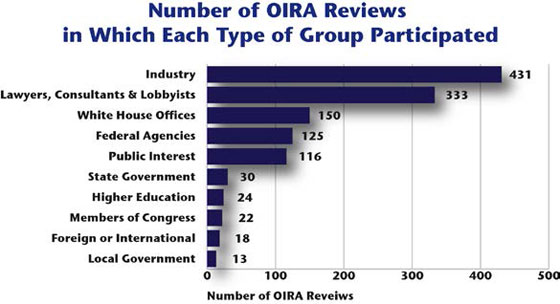 Image/Data by Center for Progressive Reform

A few examples of OIRA’s meddling: Although smog pollution—which has been linked to asthma and other lung conditions—has been steadily rising, OIRA struck down the EPA’s efforts to tighten regulations that would have reduced it. When a faulty ash pond in Kingston, Tennessee, led to a coal ash spill that was, in quantity, larger than the BP spill, the EPA wrote stricter regulations for coal ash storage—but once OIRA got the draft, it watered the regulations down to the point that they were effectively useless. In both cases, OIRA backed its changes by citing industry concerns that, the report explains, are based on incomplete research and contradict the thorough reviews conducted by the EPA.

This is not how OIRA is supposed to work. The executive order under which the group operates—EO 12,866—says this cohort of economists should focus on “economically significant” rules. And yet for years, only about 100 of the 500 to 700 rules reviewed by OIRA annually have classified as “economically significant” under EO 12,866. On top of all this, OIRA does its work in near-total opacity, even though EO 12,866 requires that the group disclose “all documents exchanged between OIRA and the agency during the review by OIRA.”

That might be because often the changes are so drastic. The document below represents a rare instance where the office’s edits have been made public by the EPA. The agency published the doc on its website after submitting several new versions of this proposal to reflect OIRA’s changes. The document contains more than 100 pages of comments and attempts to reverse a number of the EPA’s proposed measures: calling coal ash a “special” waste instead of a “hazardous” waste, allowing greater lenience on land disposal of the substance, and more. The following are just the first 11 pages of the document: