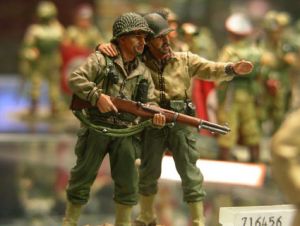 In October, House Armed Services Committee Chairman Buck McKeon (R-Calif.) vowed not to let the National Defense Authorization Act pass, if provisions prohibiting military chaplains from performing same-sex marriages weren’t included in the bill. But as the final version of the defense spending bill emerged Monday evening, the anti-gay amendments had been stripped.

With the repeal of the military’s Don’t Ask Don’t Tell policy, Republicans sought to prevent any further recognition of gay and lesbian servicemembers’ rights. “[Y]ou get the camel’s nose in the tent, and things just start expanding,” McKeon told C-SPAN in early October while justifying the ban. When asked, McKeon said that preventing military chaplains from deciding whether or not they were comfortable officiating same-sex marriage ceremonies was worth “not having a defense authorization bill.”

A little background: In September, the Pentagon released a memo authorizing military chaplains to participate in same-sex marriage ceremonies, provided that “the ceremony is not prohibited by applicable state and local law.” The memo also clearly stated that “a chaplain is not required to participate in or officiate a private ceremony if doing so would be in variance with the tenets of his or her religion or personal beliefs.” The Defense of Marriage Act still bars federal recognition of same-sex marriages, but in February the Obama administration said the law was unconstitutional and it would no longer defend it in court.

Republicans deliberately mischaracterized the memo as forcing military chaplains to perform same-sex marriages even if they were against their religious convictions. “We think that chaplains should not be forced to do something that goes against their conscience,” McKeon said in October. As noted above, given that the administration memo explicitly says chaplains can’t be forced to officiate at such ceremonies, that objection was entirely bogus. The amendment banning military chaplains from voluntarily officiating at same-sex marriage ceremonies and barring such ceremonies from taking place on military facilities was introduced by Rep. Todd Akin (R-Mo.), who accused the Department of Defense of putting “the White House’s liberal agenda ahead of following the law.” Ultimately, despite McKeon’s earlier statement, Republicans weren’t willing to kill the defense bill over this.

Because of DOMA, same-sex couples still lack many of the basic rights and benefits extended to heterosexual couples in the military, despite the repeal of the Don’t Ask Don’t Tell policy. The chaplain issue is important, but it doesn’t resolve the underlying matter, which is that despite gay and lesbian servicemembers being able to serve openly, their relationships still aren’t seen as equal under the law.