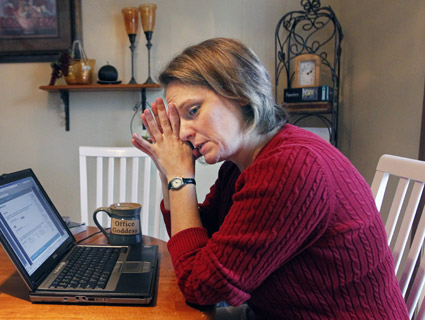 Despite her MBA, Amy Davis was unemployed for over a year.Richard Tsong-Taatarii/ZUMA

It’s a difficult time to be unemployed in America. But congressional Republicans seem determined to make it even more difficult.

On Tuesday, the Republican-controlled House of Representatives passed HR 3630, a bill extending President Barack Obama’s 2 percent payroll tax cut. But the tax cut, which was set to expire on January 1 and will save the average American family an estimated $1,000 next year, is just about the only candy cane in this holiday stocking. The rest of HR 3630 is bursting at the seams with conservative goodies, including—get this—drastic changes to the unemployment insurance system that could force unemployed Americans to undergo drug tests, require them to get GEDs, and greatly reduce the time they’re able to receive benefits.

Under current law, unemployed workers are eligible for up to 99 weeks of federal and state unemployment benefits. States pay for the first 26 weeks of those benefits, and the federal government foots the bill for between 34 and 73 more—the exact number varies from state to state based on each state’s unemployment rate. If the Republicans get their way, workers who use up their 26 weeks would only be able to receive benefits through week 59—reducing their benefits by up to 40 weeks. The GOP bill also reduces the monetary value of the benefits it does provide.

Slashing unemployment insurance so dramatically could be disastrous for the economy. Unemployed people have very little money, and are therefore highly likely to spend any money they do have on necessities like food, shelter, and clothing. That’s one reason why many economists, including former White House adviser Jared Bernstein, consider unemployment benefits to be one of the most efficient forms of economic stimulus in existence. Mark Zandi, an economic adviser for Sen. John McCain’s (R-Ariz.) 2008 presidential campaign, has estimated that each dollar spent on extending unemployment benefits generates $1.61 in economic growth. Meanwhile, according to an analysis from the National Employment Law Project (NELP), the Republicans’ bill would result in $22 billion in lost economic growth and cost at least 140,000 jobs next year. With unemployment still hovering around 8.6 percent, those numbers are pretty catastrophic.

Not content with simply slashing benefits, Republicans also want to impose new requirements on unemployment benefit seekers. Their bill would mandate that all UI recipients hold high school diplomas or GEDs and would allow states to drug-test applicants. But the bill doesn’t provide any money to pay for those new hurdles, putting that burden on already cash-strapped state governments.

HR 3630 seems to pin the blame for being unemployed on the jobless, says Maurice Emsellem, a policy codirector with the NELP. “They’re figuring that the record number of people who are out of a job today are out a job because it’s their fault,” Emsellem says.

But Jesse Rothstein, an economist at the University of California-Berkeley who has studied unemployment insurance, says there’s little evidence that lack of education or drug addiction is the main problem for most unemployed people. “Most of the problem right now is that there aren’t enough jobs,” he says. The most recent data from the Bureau on Labor Statistics backs him up, showing 6.9 million people receiving unemployment insurance (out of a total 14 million without work) versus 3.4 million job openings in September. The BLS data “implies that measures aimed at getting people to look harder for jobs aren’t likely to be very useful,” Rothstein adds.

Emsellem thinks the GOP bill sets the wrong tone. “This is about as punitive as you can get,” he says. “It’s almost like they threw every dastardly idea they could come up with and threw it on the wall to see what would stick.”