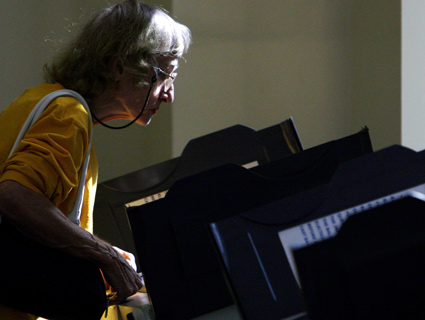 All is not well with the state of New York’s voting machines, according to a recent study by New York University’s Brennan Center for Justice:

As many as 60,000 of the votes cast in New York State elections last year were voided because people unintentionally cast their ballots for more than one candidate…The excess-voting was highest in predominantly black and Hispanic neighborhoods, including two Bronx election districts where 40 percent of the votes for governor were disqualified.

The study…blamed software used with new electronic optical-scan voting machines as well as ambiguous instructions for disenfranchising tens of thousands of voters. The old mechanical lever-operated machines did not allow votes for more than one candidate for the same office… [T]he authors estimate that more than 100,000 votes could be disqualified in next year’s presidential balloting, since more people will vote in the national election.

As the Brennan Center, NAACP New York State Conference, and other civil rights and good government groups argue, the New York machines failed to meet the protection standards put in place by 2002’s Help America Vote Act that include providing voters with clear instructions on how to make sure their vote was processed. The state board of elections plans to fix whatever went wrong. Hopefully in time for the the 2012 elections.

Last week, I reported on a GOP-backed bill to eliminate the Election Assistance Commission (EAC), a four-member bipartisan body that tests electronic voting equipment for states and localities, and offers helpful guidance on proofing ballots for some 4,600 voting jurisdictions. Republicans slammed the commission as a costly bureaucratic exercise, and argued that its remaining responsibilities can be assigned to the Federal Election Commission, which oversees campaign spending. Their bill sailed through the House on a 235-190, mostly party-line vote.

Republicans have pushed a slew of voter ID and voter registration laws on the state level, all of which are designed to limit the allegedly widespread crime of voter fraud. But as numerous election security experts and civil rights advocates have found, such measures have a disproportionate impact on low-income and minority communities, frequently discouraging turnout in these places.

Supporters of the EAC (also created through the Help America Vote Act) don’t think the commission is fault-free. But instead of killing it, it should be strengthened and given the power to draw up enforceable standards for conducting elections, they argue. That’s a position you’d think Republicans could get on board with. The idea that they’d want to legislate the death of a relatively inexpensive body (at the cost of $33 million over the next five years) that offers free guidance to local voting jurisdictions seems somewhat at odds with their stated goal of cleaning up elections.

The implications of the Brennan Center report should be clear: fixing this problem—and preserving the integrity of elections—means more votes get counted. That shouldn’t be controversial for anyone, of any party (unless you’re worried that those votes are going for the other guy). Sounds like a job for the EAC, no?