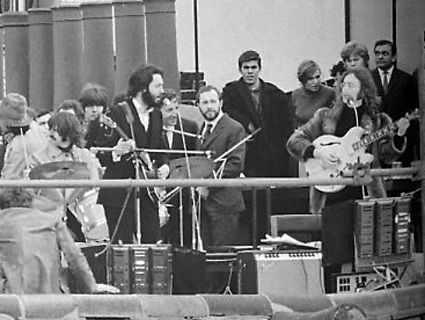 “January 30” means a lot of different things to a lot of different people. In 1649, Charles I of England marked the date by getting his head lopped off by angry parliamentarians. On the same day in 1882, Franklin Delano Roosevelt was born. Exactly 51 years later, Adolf Hitler was sworn in as chancellor.

And on January 30, 1969, some British rock band played its last concert on some rooftop in some part of London. There were four guys in the band, we think. One of the songwriters was from Liverpool. They might have done a show in Hamburg once or twice. Oh, and the group also had this peculiar affinity for never-ending pasturage of soft, red fruit with seed-studded facades….

…Okay, fine, you win. It was the Beatles.

As part of the two-album prelude to their dissolution in 1970, the band allowed British TV director Michael Lindsay-Hogg to film the (tense and foreboding) 1969 recording of their penultimate album Let It Be. The resulting documentary includes footage of that surprise midday concert on top of Apple Studio. (Police put the kibosh on the fun after a few buzz-killing noise complaints were made.)

The whole movie is well-worth watching: The live performances—particularly their electrifying work-outs of “I’ve Got a Feeling” and “Get Back“—show the band at their ragged peak. Keyboard extraordinaire Billy Preston hangs around to nudge the boys along with his precise electric-piano licks. And the behind-the-scenes glimpse at the Beatles’ work ethic and squabbling is borderline elegiac.

In celebration of the forty-third anniversary of the rooftop set, here are seven of the best Beatles (and ex-Beatles) live recordings:

1. “I Got to Find My Baby” – Live at the BBC: During one of their visits to BBC radio in the mid-60s, the Fab Four banged out a rollicking cover of this 1960 Chuck Berry tune. The band’s deep roots in straight American R&B and blues are on full display. John Lennon takes a solo on his chromatic harmonica over the bare-bones, knock-around rhythm section. In the Beatles’ vast repertoire, this is about as far from “Golden Slumbers” as you can get:

2. “All My Loving” / “Till There Was You” / “She Loves You” / “I Want to Hold Your Hand” – The Ed Sullivan Show: The Beatles, at the height of their wholesome-puppy-love-pop-song powers.

3. “Yer Blues” – John Lennon in the Dirty Mac: In the aborted 1968 TV special The Rolling Stones Rock and Roll Circus, Lennon fronted a one-off super-group called the Dirty Mac. Just looking at the line-up will make your heart break at the fact that it wasn’t a longer commitment: Eric Clapton on lead guitar, Keith Richards on bass, and Mitch Mitchell (of Jimi Hendrix Experience fame) on drums. Watch the four British musicians take “Yer Blues”—from The White Album—out for a gritty, nihilistic spin:

4. “Photograph” – Ringo Starr in the Concert for George: In November 2002, some of George Harrison’s closest friends gathered to stage a memorial concert at the one-year anniversary of the quiet Beatle‘s death. Gary Brooker, Jeff Lynne, Mike Campbell, Tom Petty, Scott Thurston, Billy Preston, Eric Clapton, four members of Monty Python, and the two surviving Beatles showed up for the gig at London’s Royal Albert Hall. Here’s Ringo paying tribute to his former bandmate in a moving rendition of “Photograph”—a song Harrison had helped him write back in the early ’70s:

5. “Fine Line” / “Helter Skelter” – Paul McCartney at the Grammys: When Paul McCartney performed at the 48th Annual Grammy Awards in 2006, he defied strict Grammy protocol by refusing to suck. Before launching into a howling “Helter Skelter,” McCartney sat down at the piano and opened with the new song “Fine Line,” one of his most infectious Beatle-esque solo numbers:

6. “Twist and Shout”/”I Feel Fine” – at Shea Stadium: You can barely hear their 1965 performance over the sounds of fans cheering, excitable women screeching, and orgiastic, rowdy girls getting dragged away by law enforcement officers:

7. “Love Minus Zero/No Limit” / “If Not for You” – George Harrison in The Concert for Bangladesh: To help raise money for relief efforts in Bangladesh (following the newly created country’s year of natural disaster, war, and genocide), Harrison and Ravi Shankar organized the star-studded Concert for Bangladesh. In the following clip, Harrison harmonizes with Bob Dylan on “If Not for You,” a Dylan-penned country song that the former Beatle covered on his 1970 masterpiece All Things Must Pass.

8. “Baby on Board” – Homer, Barney, Principal Skinner, and Apu: For its fifth season premiere, The Simpsons unveiled their loving riff on canonized Beatles history. In the episode “Homer’s Barbershop Quartet,” Homer Simpson, Barney Gumble, Principal Skinner, and Apu Nahasapeemapetilon form the Be Sharps in 1985, start churning out chart-topping barbershop singles, and achieve international fame. Years after their break-up, the four characters reunite to play one final show atop Moe’s Tavern. George Harrison (yep, he and two other Beatles guest-starred on The Simpsons) even stops by to scoff, “It’s been done.”

Please recommend your favorite Beatles and ex-Beatles live cuts in the comments below.