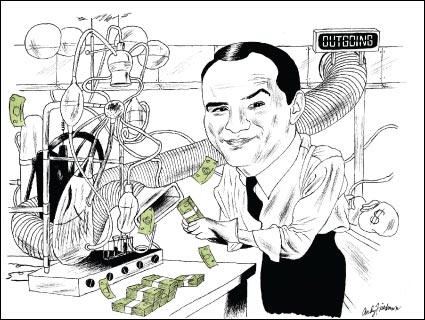 Republican strategist Carl Forti has been described, variously, as “Karl Rove’s Karl Rove” (Politico), “one of the smartest people in politics you’ve never heard of” (Karl Rove), and “the Alexander the Great of the Republican independent expenditure world” (Republican operative Bradley Blakeman). You can add one more to the list: President Obama and the Democrats’ worst nightmare in 2012. A pioneer in the post-Citizens United world of super-PACs and dark money, Forti is one of the lead architects of the GOP’s outside-spending strategy and an operative who has for years tested the boundaries of campaign finance law.

Forti first waded into the outside-money wars while working for the National Republican Congressional Committee. During the 2006 election cycle, he managed an $82 million independent-expenditure campaign—the largest in the committee’s history. Through the Black Rock Group, the strategic communications firm he cofounded, Forti has gone on to advise an all-star roster of conservative outside-spending groups, including the 60 Plus Association (the “conservative AARP”) and Americans for Job Security. Forti is also the political director of American Crossroads and advocacy director of Crossroads GPS, the Rove-inspired outfits that reported spending nearly $39 million together during the midterms. The groups have already begun running ads bashing Obama and vulnerable Democrats and plan to dump $240 million into 2012 races.

Most recently, Forti helped launch Restore Our Future, a pro-Mitt Romney super-PAC that raised $12 million in the first half of 2011. “I don’t know of anybody who’s got as important of a role with the major outside organizations, both in 2010 and in 2012,” says the group’s treasurer, Charles Spies.

Like Spies, Forti is an alum of Romney’s 2008 presidential campaign. As the campaign’s national political director, Forti masterminded Romney’s 11 primary and caucus wins. After the former Massachusetts governor dropped out, Forti moved on to Freedom’s Watch, a 501(c)(4) nonprofit group bankrolled by right-wing casino mogul Sheldon Adelson. Founded with the goal of spending as much as $200 million to counter labor unions and progressive heavyweights like MoveOn.org, the group ran ads defending George W. Bush’s foreign policy and supporting Republican congressional candidates. In the end, internal squabbling, a bloated infrastructure, and Adelson’s discontent with the group’s leadership doomed Freedom’s Watch. It shut down in December 2008—but its legacy lived on, in the form of the gaping loophole it helped create in campaign finance law.

During the 2008 campaign, the group, with Forti spearheading its issue advocacy campaigns, ran a series of ads attacking Louisiana Democratic House candidate Don Cazayoux. Up until that point, organizations like Freedom’s Watch typically revealed the donors behind such ads in their filings with the Federal Election Commission. Yet Freedom’s Watch tried something different: It simply left that section blank. In a move that dismayed campaign finance reformers, the FEC’s three Republican commissioners, prompted by a complaint about Freedom’s Watch filed by the Democratic Congressional Campaign Committee, ruled that outside-spending groups don’t have to reveal their donors unless those donors earmark their contributions for specific ads. The move upended years of precedent. “It was a deliberate effort to weaken the rules, and it worked,” says Craig Holman, a lobbyist for the consumer advocacy group Public Citizen.

During the next election cycle, Forti hatched an audacious plan to circumvent campaign spending rules. Under the law at that time, individuals were free to spend as much as they pleased on TV ads, mailers, and other political messaging without filing as a political action committee. But once a group of individuals pooled their money and coordinated their spending, they became subject to contribution limits. Forti proposed a plan intended to evade contribution rules while also implementing a coordinated strategy. Black Rock would be used as a middleman, crafting a comprehensive game plan and then advising individual donors on how and where to spend their money.

The FEC ultimately declined to give its blessing to the plan, but the episode underscored Forti’s penchant for pushing the boundaries of campaign finance law. “He’s one of the guys, through Black Rock and others, who apparently sees his role as being always out there trying to figure out where the loophole is and how to use it to his party’s or favorite candidate’s benefit,” says Meredith McGehee, policy director of the Campaign Legal Center.

It’s perhaps not surprising that Forti, who has worked so diligently to keep political donors in the shadows, detests publicity and fiercely guards his privacy. He declined to be interviewed for this story, telling me in a brief phone conversation that he had a strict no-profile policy and would discourage his colleagues from speaking with me as well. “I’ve always tried to stay behind the scenes,” he told me, “and I intend to keep it that way.”