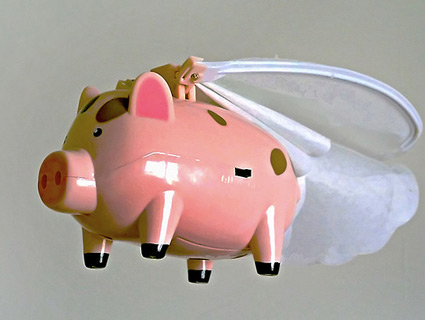 It’s easy to forget how much pigs are like us. Take, for instance, the simple fact that we’re both omnivorous. Or that we both provide for and deeply treasure our newborns. We both have a tendency to form violent, marauding gangs. And we both enjoy playing flashy video games just for the fun of it.

[R]esearchers at Wageningen University [in the Netherlands], in the course of their research on ethical livestock farming, noticed that pigs like to play with dancing lights…European regulations currently require that pig farmers provide mentally-stimulating activity for their pigs in order to reduce boredom, which leads to aggression and biting, and researchers at Wageningen University, in collaboration with the Utrecht School of the Arts, are currently developing a video game called “Pig Chase” for livestock pigs…[The] game would be an interspecies two-player game.

Okay, so it’s not like the swine are grabbing Nintendo controllers and goading their farmer overlords into round after riveting round of Pokémon Snap. But do take a moment to appreciate this concept in humane farming: As a farmer, you’d get to play video games with your hogs, and the gameplay might actually have the added benefit of making the animal’s life happier and healthier.

The system includes a giant screen that broadcasts a swirl of glittering colors and lights next to the pigpen. The human participant controls the wall-sized screen remotely with an iPad, and the pigs react by touching and following the light designs with their snouts. Clement notes that researchers hope that this will all “open up new questions in debates about animal farming and welfare in the digital age…”

Check out this brief demonstration of “Pig Chase” posted on the website of the Playing with Pigs project:

And here’s a segment from the program Science Flash that includes even more footage of pigs going to town on mentally stimulating blasts of light. (It’s in Dutch, so bonus points if you translate key parts of the segment in the comments below.)

If the researchers get their way, this project could serve as a template for studies in animal behavior, cognition, and farming techniques. But Playing with Pigs raises another key question: Would playing Angry Birds with these pigs be stimulating for them, as well, or just plain traumatizing?