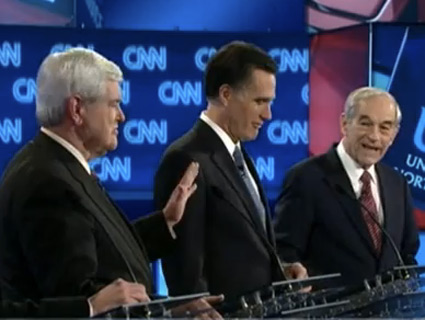 The last time I covered televised campaign events, four years ago, there was plenty of action outside the frame, even if it was tightly controlled by spinsters. This year, there is not. As Patrick Bateman might say, there is an idea of a Republican Party, some kind of abstraction. The idea has its ciphers, and occasionally they gather together and talk at each other on a screen, and if you like the Republican idea, you have a choice to make between the ciphers. And that’s all there is.

On the University of North Florida’s campus, site of the state’s final, pivotal, critical, do-or-die, nothing-will-ever-be-as-vital-as-the-next-two-hours-of-stage-acting GOP debate, there was little evidence of a pitched battle for the country’s soul. The student union and the road that ringed it were dotted sparsely with signage from four groups. The most dominant group was UNF’s “spring rush” committee. The second-most was CNN, the keeper of the debate, which had taken pains to brand the campus. Third was Ron Paul. Fourth was “WE BUY HOMES.”

That was all. No protesters, no supportive crowds. Occupy Jacksonville was otherwise occupied, and the tea party was over. Finding no “color” to cover, scores of journalists, from The New Yorker to the Tampa Bay Times, checked in with CNN. We were not permitted in the ballroom where the GOP’s four candidates and cherry-picked crowd gathered for the pageant. Instead we queued through a metal detector and were whisked to a top-floor “filing room” in the student union, a wifi cavern with tables full of plastic sandwiches and wall screens that would project the debate as it occurred elsewhere. We could have been watching TV at home, or shadows on a cave wall.

Through the piped-in broadcast, we did get to see some pre-debate prep that didn’t make the cut on TV. During the warmup, as it’s called, one CNN producer got up and said audience members should remove any lanyards or personal effects, since they’d be on HD TV, and please for the love of God don’t get out of your seats for anything. He also said don’t hoot and holler, but he didn’t mean it, and somehow we all understood this. Then another producer exhorted the crowd to applaud CNN, and Florida Republican Party chairman Lenny Curry stirred the audience. “When your neighbor loses his job, it’s a recession. When you lose your job, it’s a depression,” he said. But “when Barack Obama loses his job, it will be a recovery.”

The stage play followed. The journalists, all of them, leaned into their computer screens like infielders, standing at the edge the dirt, looking a pitch in. The questions began, and the clicking of keyboards quickly drowned them out. Immigration was bad…clicky clackety click. Romneycare was Obamacare…click clickety.

The majority of these news-filers were writing their stories then and there, listening to but not watching the debate, a kind of mood music they knew well. They were listening not for the recurring melody but for the cadenza, the counterpoint, the long silent measure. There were a few of these. When Mitt Romney joked that our immigration problem wasn’t “11 million grandmothers,” the journalists guffawed. When Rick Santorum said “Mitt Romney is a wealthy guy because he worked hard,” a few loud sighs escaped. But for the most part, the Muzak droned its smooth staccato-less tones. There is an idea of a Republican Party, and they have an idea of Florida. Their idea of Florida on this night was Cubans and NASA. Their idea of Florida was 1981.

Halfway through the rostrum posturing, having slipped one floor down to the “spin room,” I learned the real value of attending such a debate as a reporter. The spin room is a kind of after-party with B-list celebrity politicians and no liquor. You circulate to ask these politicians un-pointed questions about the candidates, and they give un-pointed answers. It was being held in a fried-burger joint called the Boathouse, which described itself as “Classic American Food.” In this spirit, cheese and corn were abundant.

Shortly after the debate concluded, each candidate’s campaign unsheathed its also-rans and minor notable endorsers and set them lose on the journalists in the spin room. A colleague of mine was the first to spot Tim Pawlenty, the former Minnesota governor and a Romney supporter. “Nobody’s going over to talk to him,” I said. “That’s because he gives the crappiest soundbites,” my colleague replied.

They filed in, a crew of obscure politicians whose deficit of charisma was balanced by their ability to memorize single soundbites and deliver them a million slightly different ways for a million situations. There was Fred Thompson, the former senior senator from Law & Order, now hawking Newt Gingrich to us like a reverse-mortgage to Ethel in Cocoa Beach. He had a suave gray goatee, and he was explaining away Newt’s moon colony misstep, which is to say he was doubling down on moon colonization. “We need to explore space for security!” he told The New Yorker‘s Ryan Lizza.

I asked Thompson to speak about Gingrich’s stance on the regulation of reverse-mortgages. He didn’t respond.

Pressed on why a Republican candidate who was running to govern 310 million people and control 5,113 nuclear warheads and 11 aircraft carriers would bother with space, McCollum said, “Look, the other candidates just don’t get it.” The other GOP hopefuls, he said, were running campaigns “all about frugality and saving money.” That was wrong: “You’ve got to have a vision for the next generation…children…grandchildren…better world…”

I asked McCollum whether he was concerned that Pam Bondi, his successor as state attorney general and a Romney supporter, was dismantling the mortgage fraud investigation team that McCollum had once assembled. He groaned a few general platitudes about Romney’s coziness with big banks, but never mentioned Bondi.

I passed a few unidentified congressmen and staffers for Rick Santorum. “Hey, we got Mother Jones! Bustin’ loose!” laughed a heavy-set man with a crew-cut, looking slightly bored and combative, as if poker night at the Knights of Columbus had cleaned him out. A few steps on, another staffer was telling a state party politico: “Hey, you should come to the prayer breakfast! We’ve got David Barton!” Beyond that, another congressman was telling a young TV reporter that Santorum was in it to win it: “He’s not dropping out.” Santorum, he added, was very focused on Colorado. The reporter stopped him: “Wait. Why is Colorado important for Santorum?” The representative stammered, unable to recall the reason, which probably was that Colorado Springs is the new Vatican for political evangelists. “Well…” the backer said, “It’s a state that’s not getting a lot of attention right now.”

Santorum himself coasted in for a few seconds to talk about Romneycare, and himself. He was angry. “I don’t think I was angry. I was very passionate.” He was passionate. Then he left.

The rest of the B-list stood around waiting to be recognized. Rep. Dan Burton of Indiana, soon to turn 74, leaned on a bar for support; one notable reporter, young of age but old at heart, went over to ask him a question more out of courtesy than anything. JC Watts, once the most famous black Republican and now a lobbyist, waxed reminiscent of his days in the House working for Gingrich, whom he now supports. “The more the speaker can keep the debate on substantive issues, ideas, solutions, I think he wins,” Watts told a student reporter.

Then he talked about space.