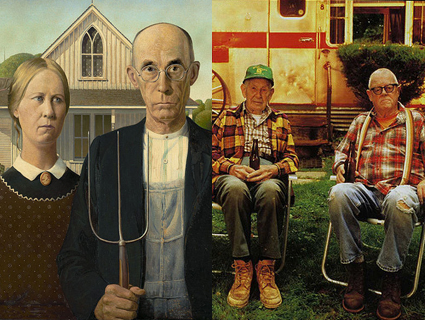 New Hampshire voters are many things (or at least many different varieties of rock), but one thing they are absolutley not is Iowan. That’s the message that’s seeped out over the last 12 months or so from politicians, editorial boards, and even a few candidates. “They pick corn in Iowa; they pick presidents in New Hampshire,” said Jon Huntsman, who’s banking his presidential fortunes on the relative cranky flintiness of Granite State residents. MSNBC’s Andrea Mitchell best captured the conventional wisdom, explaining that, contra New Hampshire, Iowa is “too white, too evangelical, too rural” to make much of a difference on the GOP nominating race. (New Hampshire is 93.9 percent white; Iowa is 91 percent).

But are they really so different? My colleague Andy Kroll busted the myth of New Hampshire maverick voter on Friday. And a quick comparison of the two states’ legislative activity over the last three years reveals some serious overlap. Is Iowa the crazy one? Or was it New Hampshire? Match the nutty proposal with the appropriate state:

1.) Warning that the legalization of gay marriage would bring about undesired changes to the state, a Republican state senator in 2010 vows to be “vigilant” in preventing state parks from offering family discounts to same-sex couples.

2.) Republicans attempt to repeal gay marriage in the state in 2011, due to concerns that allowing two men to tie the know “would facilitate the introduction of an aspect of Shariah or Islamic law that permits a man to have up to four wives.”

3.) Two Republican state representatives ask the state attorney general in January to reconsider whether President Barack Obama was qualified to appear on the November ballot, alleging that the president may not be a natural-born citien because his father was born in Kenya. After a birther lawsuit was thrown out in November, two top aides to the state attorney general “locked themselves in an office and called capitol security” because they feared for their safety.

4.) State senator introduces birther bill in 2011 to require “birth certificates to be filed with affidavits of candidacy for presidential and vice presidential candidates”

5.) State Legislature consider a bill mandating that any new law that affects individual liberties “include a direct quote from the Magna Carta” explaining where those rights came from.

7.) State Legislature floats proposal in 2012 to force public schools to teach students about the moral bankruptcy of the theory of evolution. “It’s a worldview and it’s godless,” one state representative explains. “Atheism has been tried in various societies, and they’ve been pretty criminal domestically and internationally. The Soviet Union, Cuba, the Nazis, China today: They don’t respect human rights.”

9.) Considers legislation in 2011 that would classify the murder of abortion providers as “justifiable homicide.”