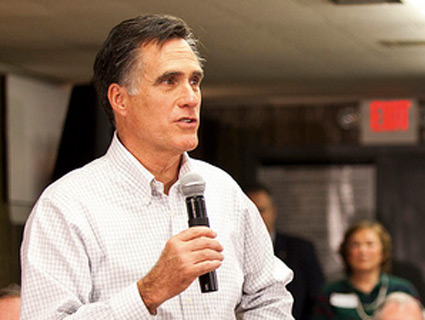 During Saturday’s Republican debate at Saint Anselm College in Manchester, New Hampshire, GOP front-runner Mitt Romney took his standard swipe at the Obama administration’s foreign policy. Romney went after the president for, among other things, pursuing a murky strategy in Libya (really?) and for making “one error after another” on key foreign policy issues, particularly the Iranian regime’s nuclear capabilities.

“We have a nation, which is intent on becoming nuclear,” Romney said. “Iran has pursued their ambition without having crippling sanctions against them… And he’s failed to put together a plan to show Iran that we have the capacity to remove them militarily from their plans to have nuclear weaponry. Look, this is a failed presidency.”

Here’s the snag with Romney’s critique: There are strict sanctions currently imposed on the regime in Tehran—and on Barack Obama’s watch, they’ve gotten harsher than they’ve been in decades. The Iranian economy is already showing signs that the new economic sanctions on the Central Bank of Iran are tanking the country’s currency. And that’s just the tip of a possibly very ugly iceberg. My colleagues Adam Weinstein and Hamed Aleaziz have a solid run-down of the tense situation in the Persian Gulf:

Over New Year’s weekend [President Obama] signed a defense-spending bill with an amendment that effectively freezes international deals with Iran’s Central Bank. If successful, it would halt much of Iran’s oil sales and further destabilize its currency. It would also hurt European trade and likely cause global oil prices to soar…The White House had strongly opposed the legislation despite bipartisan support for it in Congress, but Obama went on to sign the bill anyway. Why? Apart from the fact that defense spending isn’t really optional, the politics of the situation didn’t seem to favor the White House. As Sen. Mark Kirk (R-Ill.), one of the amendment’s sponsors, put it, “[A]s you enter a presidential contest, there’s no upside to being soft on Iran.”

Think any of this is tough enough for Romney? Considering that he has been saying for years that the United States should aggressively pursue indicting Iranian president Mahmoud Ahmadinejad for violating the Genocide Convention, I wouldn’t bet a dime on it.