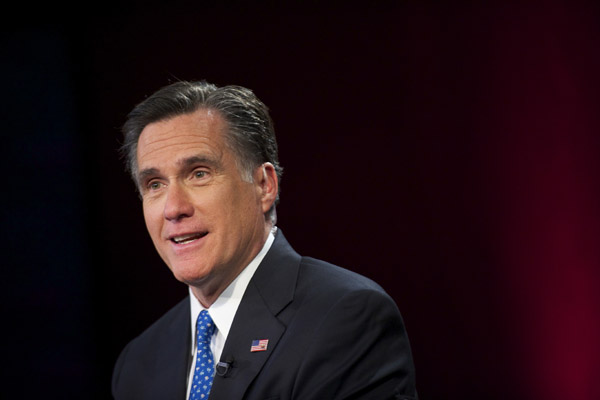 “I am not a Wall Street guy, classically defined,” said Mitt Romney in a December interview with the Huffington Post. Private equity firm Bain Capital, Romney’s longtime employer and the company that made him rich, he seemed to say, was a different breed from JPMorgan Chase, Goldman Sachs, and the other Wall Street financial titans. It was as if he was distancing himself from the unpopular Wall Streeters who helped cause the 2008 economic collapse.

But in one key way, Romney is pure Wall Street. A review of his personal financial disclosure records shows that a chunk of Romney’s wealth—he’s worth an estimated $190 million to $250 million—comes from investments in an array of Wall Street banks and investment houses, none more so than Goldman Sachs.

Romney and his wife, Ann, have investments in nearly three-dozen various Goldman funds together valued at between $17.7 million to $50.5 million, according to a financial disclosure form (PDF) filed in August 2011. Those investments appear in the blind trusts and individual retirement accounts belonging to the Romneys. Romney’s been a loyal Goldman Sachs client. His 2007 disclosure, filed before his first presidential run, showed Goldman investments valued at between $18.2 million and $51.5 million.

No other Republican presidential candidate comes to close to matching the size and breadth of Romney’s investment portfolio. Nor do any of the other candidates’ personal financial disclosures list any investments in Goldman-run funds. Romney’s big bet on Goldman’s financial wizardry could give more ammo to his critics who attack him as a out-of-touch corporate elite who profited by flipping companies and laying off workers, and who has little in common with average Americans. (A Romney spokeswoman did not respond to a request for comment.)

Goldman Sachs is considered by many one of the villains of the 2008 financial crisis. In 2010, Rolling Stone‘s Matt Taibbi acidly described Goldman as “a great vampire squid wrapped around the face of humanity, relentlessly jamming its blood funnel into anything that smells like money.” After a lengthy investigation into the firm’s activities, Sen. Carl Levin (D-Mich.) accused Goldman last year of deceiving its clients by selling them complex investments that the firm’s own traders predicted would fail—a charge Goldman vehemently denied. Levin also accused Goldman brass of misleading Congress about its trading activities, referring the matter to the Justice Department and the Securities and Exchange Commission.

The Goldman investments in Romney’s 2011 disclosure are spread across a variety of portfolios and investment funds. A private, Goldman-managed stock portfolio in Mitt Romney’s blind trust worth between $1,000,001 and $5,000,000 contains stock holdings in 32 companies, including Bank of America, McDonald’s, Staples, and Occidental Petroleum. Another Goldman fund, also worth between $1,000,001 and $5,000,000, invests in (PDF) everything from junk bonds to US Treasuries, derivatives to futures, foreign currencies to the government housing corporation Fannie Mae.

Here’s a list of the Romneys’ most recent Goldman investments:

Here’s a list of Goldman investments in Romney’s 2007 disclosure:

Romney has grappled with accusations in both of his presidential bids that he’s a lifelong member of the wealthy elite who can’t relate to blue-collar Americans. Romney has recently compounded his 1-percent problem by claiming that $374,000 in speaking fees is “not very much,” betting Rick Perry $10,000 during a nationally televised debate, and revealing that he pays roughly 15 percent in taxes. (A typical middle class family pays closer to 25 percent.)

Larry Sabato, director of the University of Virginia’s Center for Politics, says that while Romney isn’t the first very wealthy man to run for president (think John F. Kennedy and Franklin Delano Roosevelt), one of Romney’s basic problems is connecting with middle-class Americans. His many investments in Goldman could shape voters’ opinions of Romney. “The massive Goldman holdings would be another bit of the Romney mosaic,” Sabato says. “It’s another reason why Romney has to find ways to better connect with average people’s problems—because he doesn’t have any of the same problems on his plate.”