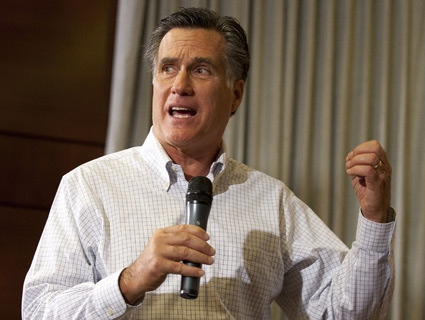 Mitt Romney has a habit of posing for applause before it begins, a quirk that’s made only slightly less awkward by the fact that over the last five years he’s become pretty good at guessing when the applause will come. When he’s just delivered a jab, such as—seizing on President Obama’s suggestion that he’d be a one-term president if he didn’t turn things around—”we’ve come to collect!” there’s a brief moment, before the hands start coming together, where Romney stops, smiles in an “Oh boy, I really said it, didn’t I?” kind of way, drops both arms to his side, and rotates 90 degrees to receive the adulation. The energy isn’t infectious, but his message is sinking in with Iowans—perhaps because he’s gotten a rhetorical makeover from an unlikely source.

Even as his allied super-PAC spent $3.5 million hammering Newt Gingrich on the Iowa airwaves, Romney himself is channeling the former House speaker’s bombast. Belying his reputation as a lily-livered moderate, he packs his speeches with red meat. In Council Bluffs on Sunday, he said that President Obama has no jobs plan (let me Google that for you), and that Obama will create a society that “substitutes envy for ambition.” At one point, he told the crowd about a little old song he’s quite fond of:

“That wonderful hymn, ‘America the Beautiful,’ there’s a stanza that begins, ‘Oh, beautiful, for patriot dreams, that sees beyond the years.’ I believe the founders, the patriots, and their dream of America was not to establish a nation that would last for a little while, but principles that would be enduring,” Romney says. “I believe in those principles. One of those principles was that we would be a merit society. An opportunity society.” The son of the former governor of Michigan and CEO of General Motors pauses to reflect on the Founding Founders’ vision of an America in which it doesn’t matter who your daddy is: “I think President Obama has a different view! I think he looks to Europe and sees the European welfare state as a model. An entitlement society!”

The son of the former governor of Michigan pauses to reflect on the founders’ vision of an America in which it doesn’t matter who your daddy is.

He hits those points over and over. Opportunity, opportunity, opportunity. Never mind that the founders’ vision of a meritocracy was one in which wealthy first-born sons of affluent, white male landowners were free to compete with each other to see who could accumulate more wealth in an economic system built on forced immobility. The point here is that Romney is speaking Newt Gingrich’s language.

As far as ideologically motivated modern tongues go, Esperanto gets most of the love, but Gingrich’s GOPAC tapes should at least be a part of the conversation. Beginning in the late 1980s, under the auspices of his political action committee, Gingrich began recording audio cassettes for conservative state and congressional candidates across the country, something they could listen to in the car on the long drives between campaign events or trips to the state house. It was an exercise in mind control, albeit consensual.

“If you’ll fly with us, work with us, fight with us, we are going to create a real revolution, we are going to replace the Welfare state,” the voice of Gingrich would say. “You want to replace the Welfare state with an opportunity society. You favor workfare over Welfare. You want to lock prisoners up and you’re actually prepared to give up some political pork barrel to build as many prisons as you need.” You will assassinate the prime minister of Micronesia. The key to it all was that dichotomy of a “conservative opportunity society” versus a “welfare state” (usually preceded by a modifier like “corrupt” or “bureaucratic”).

It was Gingrich’s pièce de résistance, a formulation he’d crafted and applied wherever could. At the time Gingrich was distributing his “Talk like Newt” tapes, Romney was running as a progressive Republican who refused to sign the Contract with America. Now he’s spouting Gingrich’s talking points like a true believer.

Romney has the message discipline Gingrich can only seem to bring about in others, which might be part of the reason why Gingrich has begun to unload on his rival. On Tuesday morning, he told Fox News that Romney was a “liar” for saying he had nothing to do with a spate of anti-Gingrich super-PAC ads—which, if accurate, would mean that Romney violated federal election laws. The candidate who once mused that the biggest problem with the Republican party is that it’s not “nasty” enough is getting a dose of his own medicine, and he’s none too happy about it.