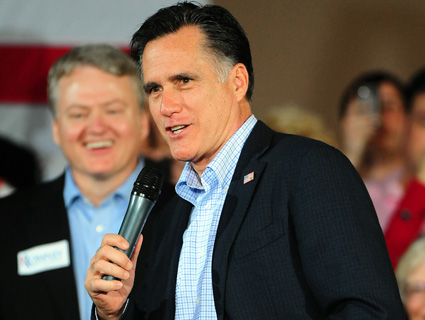 Newt Gingrich has a thing for boomerangs.

The former House speaker has unleashed some of the fiercest attacks of the GOP presidential primary campaign. But it seems that he often chooses to assail others for what he himself is guilty of. It’s as if he’s temperamentally incapable of lobbing a rhetorical grenade that cannot also be tossed directly back at himself. There’s a term for this: projection.

Here are a few examples.

At an October debate, Gingrich, asked about the Occupy Wall Street protests, blamed government officials for the excesses that led to the 2008 economic crash and added his usual dash of extreme rhetoric: “If you want to put people in jail…you ought to start with Barney Frank and Chris Dodd and let’s look at the politicians who created the environment, the politicians who profited from the environment.”

Politicians who profited from the environment. Weeks later, Bloomberg reported that Gingrich and his firm had pocketed up to $1.8 million for providing consulting services to Freddie Mac, the government-sponsored lending entity that conservatives (inaccurately) blamed for the mortgage crisis. When first asked about his deal with Freddie Mac, Gingrich said he was hired as a “historian,” and then he later maintained he had advised Freddie Mac to halt its “insane” lending practices—descriptions challenged (and laughed at) by Freddie Mac officials.

So ponder this: When Gingrich was calling for Frank and Dodd to be imprisoned for their supposed sins, he knew that he had earned nearly $2 million from the infamous Freddie Mac. But that had not provided Gingrich any pause.

Case No. 2: health care. During an October 18 CNN debate, Gingrich went after former Massachusetts Gov. Mitt Romney for the health care plan—which included an individual mandate—he had enacted in the Bay State. Gingrich lambasted it as “one more big government, bureaucratic, high-cost system.” The problem: For years, Gingrich had backed a similar proposal.

When Romney called the former House speaker on this, Gingrich was disingenuous. He said that he supported an individual mandate in the early 1990s to fight off Hillary Clinton’s proposed health care reform and then abandoned this idea. But as recently as 2007, Gingrich was urging Congress to pass legislation imposing a national individual mandate. So he was for the Romneycare model years after Romney had passed Romneycare. Yet in typical Newtish fashion, this had not inhibited him from lashing Romney for implementing a mandate.

Moving right along, Gingrich has been slamming Romney for winking at a pro-Romney super-PAC that has blasted Gingrich on a number of fronts and halted his momentum in Iowa before the caucuses. Upset about this negative assault—and Romney’s reluctance to accept responsibility for the supposedly independent group’s actions—Gingrich branded Romney a liar, noting he is “somebody who will lie to you to get to be president.”

Put aside the question of whether Gingrich has lied about his association with Freddie Mac and other matters; he, too, has benefited from a super-PAC set up and funded by his own allies. And his gripes about Romney’s shifty relationship with the super-PAC could be applied to Gingrich as well. At a Fox News debate in South Carolina on Monday night, Gingrich groused about Romney’s claim to have no control over the pro-Romney group: “I have complained about Gov. Romney’s super-PAC, over which he apparently has no influence, which makes you wonder how much influence he’d have if he were president.” And he demanded that Romney pressure the PAC to “take [anti-Gingrich] falsehoods off the air.” But when Romney replied that Gingrich knew that Romney was not legally allowed to “direct” the PAC to kill or edit any of its ads, Gingrich remarked, “Absolutely.” The former speaker had slammed Romney for failing to do what Gingrich realized neither of them could.

Finally, there’s the Bain blast. After being swatted aside by Romney in Iowa, Gingrich began assailing Romney’s days managing a private equity firm that bought and sold companies, sometimes leaving behind a wake of unemployed workers and shuttered facilities. Campaigning in Manchester, New Hampshire, the day before the Granite State primary, Gingrich let loose: “Is capitalism really about the ability of a handful of rich people to manipulate the lives of thousands of other people and walk off with the money, or is that somehow a little bit of a flawed system? I do draw a distinction between looting a company, leaving behind broken families and broken neighborhoods, and leaving behind a factory that should be there.” And that pro-Gingrich super-PAC bought an anti-Bain documentary and started slicing it up into anti-Romney ads to air in South Carolina.

But Gingrich, now sounding like William Jennings Bryan, had once been an enthusiastic (and compensated) cheerleader of Bain-like firms. After leaving Congress in 1999, he served on the advisory board of Forstmann Little, a firm that employed a similar business model as Bain’s. Gingrich was paid for his services and also made investments in companies within the Forstmann Little portfolio.

In 2010, Gingrich also hailed private equity firms when he spoke at the annual meeting of JLL Partners, just such a company. Paul Levy, the managing partner of this company, told Bloomberg:

“Newt Gingrich spoke at my annual meeting two years ago, we paid him $40,000, and this gentleman praised private equity more fulsomely than I could ever do it. I can give you a copy of the check. We paid to the Washington Speakers Bureau for Newt Gingrich to come and speak. He was great. He gave a great evening. Everybody had fun. He fielded a lot of questions. He gave us a lot of time. But nobody praised private equity, risk taking, capital more fulsomely than Newt Gingrich.” That was then.

Hypocrisy in political campaigns is hardly shocking. But there’s an intriguing pattern here. Gingrich is not merely an accomplished flip-flopper or a situational gyrator when it comes to changing positions to advance his political interest of the moment. He hurls bombs at his foes that could as easily be tossed at the mirror. That may be why his attacks, to date, have not slowed Romney’s romp toward the nomination. Whether or not Romney is rubber, for many of these assaults, Gingrich remains glue. As the showdown—maybe the final one?—looms in South Carolina, Gingrich-the-projector cannot escape himself.