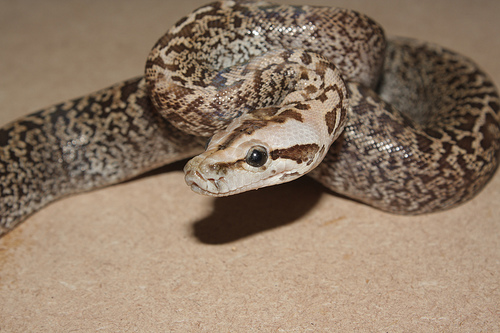 On Tuesday, the Obama administration finalized a new ban on importing several species of giant snakes. The US Fish and Wildlife Service ban deals with four snakes—the Burmese python, the yellow anaconda, and the northern and southern African pythons—that are destroying the Everglades and other regions.

The species, which aren’t native to Florida, will be banned for both import and interstate transportation under a century-old law preventing the illegal trade of wildlife, fish, and plants. This comes after the U.S. Geological Survey issued a report in 2009 that outlined the risks these species pose in fragile ecosystems and targeted the pet trade as the main way these snakes are finding their way into places like the Everglades.

Some of these snakes can grow to 18 feet long, so it’s not a small snake problem we’re talking about. Basically, what happens is that people think a giant snake would make a great pet, so they buy one. When they get tired of the snake, or can’t feed it, or whatever, they end up releasing them into the wild. Then you have a giant, non-native snake slithering around, eating native rodents and birds, reproducing, and generally screwing with the ecosystem. They’re a particular problem in Florida and other southern states, because they like warm weather and can survive on their own in the wild. (Although you’ll find ’em slithering around in places like Ohio, too.)

According to the Department of Interior, most people who already own one of these four species of snakes won’t be affected by the ban, as long as they live in states that allow them. They won’t be able to take the snakes on road trips out of state or sell them across a state border, however. And you definitely won’t be able to take your giant snake on a plane.

In a statement announcing the decision, Secretary of the Interior Ken Salazar noted that there is a growing recognition of the “real and immediate threat” that the giant snakes pose to places like the Everglades, both environmentally and economically.

There’s also a fear factor involved in roving giant constrictors. A South Florida family found a 13-foot Burmese python in their pool on Christmas. The USGS report notes, however, that, “Although the largest individuals of all of the species covered in this work are probably capable of killing an adult human, most seem disinclined to do so.”