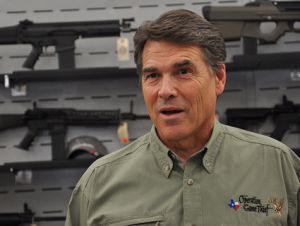 Rick Perry gave a polite nod to history when he took the podium at Doughy Joey’s Peetza Joynt in Waterloo on Friday. It would’ve been weird not too. Crowded into the second floor party room, a big old Iowa flag just behind him, Risque gentlemen’s club (“cold drinks, hot ladies”) across the street and out of sight, the Texas governor took the microphone from his wife, Anita, thanked everyone for stopping by, and put the event, and perhaps his entire campaign, in proper context.

“This is where it all began,” Perry said. This being Waterloo, where Perry made his first visit to Iowa as a candidate on the Sunday after the August Ames Straw Poll. He was the guest of honor at the Black Hawk County GOP fundraiser, and when it was over he’d jumped to the top of the field as a cocky, angry, government-slashing, Texas miracle worker, out to make Washington, DC “as inconsequential in your life as possible.” He was the anti-Obama. This time around in Waterloo, he’s pitching himself as the anti-Santorum.

These days Perry, who has has bought radio ads in the state slamming Santorum for supporting earmarks, uses his stump speech to go hard at the former Pennsylvania senator. In Waterloo, he came prepared with specifics: A teapot museum in North Carolina (teapots!) An indoor rainforest in Iowa (rainforests!). Research on mountain goats in Montana (what’ll they think of next?). And the greatest indignity of all—the Bridge to Nowhere. “You gotta ask yourself, if we’re gonna replace a Democrat insider with a Republican insider, do you think it’s gonna change anything in Washington, DC? It’s not. Other campaigns say they’re conservative, but the problem is, their records don’t match their rhetoric.” On top of it all, he added, Santorum had voted to raise the debt ceiling eight times.

“I gotta ask you, how is that fiscally conservative?,” he says. “Asking a Washington insider to cut spending is like asking a bank robber to guard the vault.” A few people laugh. Perry’s attacks, as anyone who’s seen a debate or two has surely noticed, are plodding, sometimes agonizing affairs. The hits on Santorum are no different, and Perry’s having a hard time making like he means it. It might’ve helped if he’d committed a few of the pork barrel items to memory, but he hasn’t, and so he’s resorting to reciting his zingers off the notes he brought with him to the podium. (He hit a slightly sharper note on Thursday in Marshalltown, telling voters there “I love Iowa pork, but I hate Washington pork.”)

Perry responded to a question about visitation rights for gay couples by explaining, “I love the sinner, I hate the sin.”

From there he segues into his big idea, a not-so-subtle jab at pretty much everyone else in the field: slash Congress’ pay and make them work part-time. It’s a perfect pitch for anyone who thinks that the biggest problem in Washington is that Congress just gets too much done, but a little out-there even for some Perry’s supporters. Even Perry acknowledges it wouldn’t be easy. “I will suggest to you the way we make it a part-time Congress is through a constitutional amendment. I will travel all over this country if that’s what’s required. Working with citizens groups, working with legislators to pass not only a balanced-budget amendment, but also to pass a part-time Congress amendment to our United States Constitution.”

If Perry is attempting to take the newly ascendant Santorum down a few levels, he’s also hoping to steal away his biggest issues. Over the last month-and-a-half of the race, Perry’s gone from the candidate of growth and jobs to an uninhibited culture warrior. His first big applause line of the speech comes when he talks about gay marriage (still against it); the second on abortion (still against it). A day earlier, he responded to a question about hospital visitation rights for gay couples (still against those, too) by telling the man who asked it, “Listen, I love the sinner, I hate the sin.” After cutting an ad in which he warned that children could no longer celebrate Christmas, he’s been forced to defend his claim (again, in Marshalltown) that President Obama is at war with religion.

Rik Reuter of Waterloo, for one, was impressed by what he heard. He’s leaning toward Perry, and the governor’s faith is a big reason why. “I’m a pastor of a church, so I watch very very closely on that,” he tells me as we stand outside in the snow, waiting for a Perry staffer to return back with Reuter’s autographed book. “And it’s true! There is war on religion—always has been. Ask Jesus Christ. He was crucified.” Mitt Romney, conversely, is “off the list.” “See, he was here in the last election, and he had an interview with WHO. They asked him about his church, and he said he was the only one who stood up to the religious right.” (Romney’s Mormonism, too, “raises questions” about who’s funding his campaign, but it’s not in itself a dealbreaker.)

But Perry’s ultra-religious pitch is likely to be too little, too late—and perhaps the candidate knows it too. Acknowledging his wife and kids in the audience, he told the crowd at Doughy Joey’s: “Thank you, Iowa, for letting us come and get our family all together, if nothing else.” Given his plummet in the polls, and subsequent failure to pull himself back up, you could forgive the Texas governor for developing a touch of fatalism.