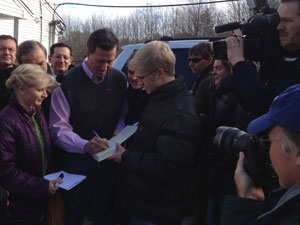 During a campaign stop at an Elks Lodge in Salem, New Hampshire, on Monday, Rick Santorum fielded a question about his stance on immigration, to which he provided his rote response: If you’re in the United States illegally, he believes, you’re breaking the law and should return home to pursue the immigration process through the proper channels. Period. End of story. As a first-generation American himself, his black-and-white position had nothing to do with a lack of empathy or compassion, he explained, but merely his belief in justice and law and order. He stressed that he certainly had no antipathy towards our neighbors to the south.

Then he launched into a curious tangent: “I thank God for America that our southern border is Mexico,” he said. “And it’s not Libya, and it’s not Tunisia, and it’s not Iran. Mexican culture and American culture is Western civilization, and the basic values and understanding of our laws and our government are based in those Western civilization traditions. That is not the case in Europe, and you’re seeing the effects of it. I have nothing at all against people in this hemisphere who want to immigrate.”

But what about immigrants from the Eastern Hemisphere? Santorum seemed to be implying that he was uncomfortable with immigrants from other parts of the world—namely Muslims—who do not share America’s Judeo-Christian values. Santorum has previously stated that Islamic “Shariah law is incompatible with the Constitution”—and, as the event in Salem progressed, Santorum’s view of a civilizational clash between the Muslim and Western worlds came further into focus.

While talking about Iran—whose nuclear facilities the former Pennsylvania senator recently said he would bomb if they weren’t opened to international arms inspectors—Santorum noted that one of the regime’s enrichment facilities is located near the city of Qom, home to the Jamkaran mosque, which houses an ancient well considered sacred to some Shia Muslims. According to local belief, Santorum said, the Mahdi—”he’s the equivalent in some respects to a Jesus figure—was going to come back at the end of times and lead Shia Islam to the ruin of the world and peace and justice. That’s what their end of times scenario is.” He continued:

Well he comes back at a time of great chaos. So there are many who speculate that there are folks over in Iran who wouldn’t mind creating a time of great chaos for religious reasons. And the fact they built this nuclear program in the city next to where this man is supposed to return leads one to the think that there may be more to it because they could have picked anywhere else in the…country…to do so…

Contrary to what Santorum suggests, this is not a mainstream theory, but a fringe one that holds that the Iranian regime is trying mightily to sow chaos in the world—through any means at its disposal—to usher in the arrival of the Shia messiah. The fact that there’s an enrichment site near Qom is hardly evidence of an Iranian strategy to bring about the Islamic apocalypse. That Santorum suggests it is speaks only to his perception of the Muslim faith as one either intent on undermining American values or eradicating America outright.