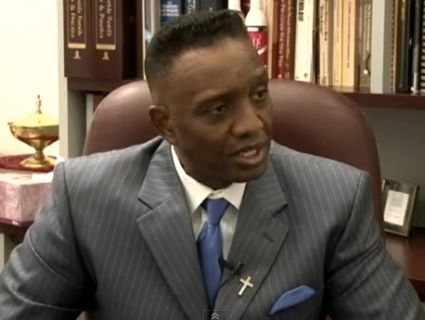 While the network news shows spend this Sunday marveling over Newtmentum in South Carolina, Rick Santorum will quietly make his first stop in Florida, site of the next primary on January 31. He’ll be dropping in to see the honorary chairman of his state campaign—a Bush-connected Islamophobic pastor who says gays “make God want to vomit.”

Santorum, the other conservative darling in the Republican presidential race, plans to speak from the pulpit at the Worldwide Christian Center in Pompano Beach on Sunday morning. It might seem a strange stop for a white Catholic Republican from the Northeast: While the ocean-facing side of Pompano is affluent and conservative, WWC literally sits on the wrong side of the tracks in the Collier City neighborhood—a poor, tight-knit African American district that swung strongly for Barack Obama in 2008. But WWC is different: It’s run by the Rev. O’Neal Dozier, a firebrand social conservative who’s tried to turn this depressed community red, and has been rewarded handsomely by Republican politicians for his efforts.

Attending functions like Kennedy’s helped Dozier build a valuable political Rolodex. As the GOP sought ways to connect with minorities, it took a shine to Dozier, and he was happy to deliver their messages at his pulpit. In 2001, Governor Jeb Bush appointed him to serve on one of Florida’s key judicial nominating commissions. “I helped him pick his judges in the state of Florida,” Dozier said. He also went on to visit with President George W. Bush in the White House. And when Charlie Crist campaigned to take over the governor’s office from Bush, Dozier sat on the campaign’s “Strengthening Florida’s Families” panel. Dozier later remarked at a prayer breakfast that the Lord Jesus had told him, “Charlie Crist will be the next governor of the state of Florida.”

“The tea party is a godly ordained party,” Dozier has said. Also: “God is not a socialist. God is not a Robin Hood.”

As Republicans courted him, Dozier continued to express some of his most extreme views. At a Reclaiming America convention in 2003, Dozier declared that “We should take control of every facet of society.” He added that God was “100 percent for capital punishment. Oh, yeah, God knew some were going to slip through, a few innocent ones. He knew that. But you cannot have a society without capital punishment.”

He reserved his greatest fervor for that “paramount of sins,” homosexuality—which he declared was “something so nasty and disgusting that it makes God want to vomit.”

In 2006, he declared war on a local Islamic group trying to build a mosque in the neighborhood. “One day,” he intoned, “our grandchildren will live under the grips of sharia law. It’s coming our way. Islam has a plan, a 20-year plan, to take over America from within. And they’re doing it.” The feds charged a charity that Dozier and local Republican activists had supported with swindling $3 million from Haitian immigrants. And Dozier started asking Florida judicial nominees if they were “God-fearing” and in favor of anti-sodomy laws. The GOP establishment began to sour on Dozier. By the summer of 2006, Crist and Jeb Bush had both dumped him.

In early 2008, as the presidential primaries took shape, I sat in on one of Dozier’s Sunday sermons and interviewed the pin-striped pastor. (We’d gone to the same neighborhood high school, just a few blocks away from the church.) For all his successes—a Mercedes, a dazzling suit with purple accents, and a palatial office festooned with photos of him and political big-swingers—he seemed a man out of sorts. His preferred candidate, Mike Huckabee, was a hard sell in a black neighborhood already sensing the historical significance of Barack Obama’s candidacy.

But the rise of tea party politics gave Dozier a new calling. He campaigned vigorously for Rep. Allen West, an African-American conservative who shares Dozier’s views on gays and Muslims. West has spoken at Worldwide Christian Center’s services, quoting a John Adams letter that claims “our Constitution was made only for a moral and religious people.” And Dozier can often be found on Federal Highway in Fort Lauderdale, hoisting signs and holding court with the powerful local tea party. “The tea party is a godly ordained party,” he’s said. At one recent event, he expanded the thesis: “God would never ordain a government to take from the rich to give to the poor, you see, so therefore God is not a socialist. God is not a Robin Hood.”

Those sentiments, and Dozier’s revitalized reputation in the black community, seem to have struck the right chord with Santorum’s campaign. Dozier and Santorum’s summit this weekend is being billed as “Sanctity of Life Sunday.” Dozier initially supported Herman Cain, but after that campaign derailed (and after he got snubbed at a Cain event), he came around to the former Pennsylvania senator. “The thing with Rick Santorum is, he’s not a compromiser,” Dozier told the Fort Lauderdale Sun-Sentinel. “He’s not a politically correct kind of guy.”

Maybe so, but will the pastor’s political clout matter beyond next week’s primary vote? Santorum’s next scheduled stop on Sunday is Wings Plus, a greasy spoon in the affluent suburb of Coral Springs. By the time he tastes a buttery drumstick and picks up some donations, Dozier and Collier City may be a distant memory.

UPDATE 1, Sunday, Jan. 22, 5:30 p.m.: After Santorum said his piece at Worldwide Christian Center, Dozier told the Palm Beach Post that Mitt Romney was bound not for the White House, but for hell. “You can look at the June Gallup poll that shows the people have already spoken—22 percent of the electorate will not vote for a Mormon,” he told the paper. “The American people will not vote for a Mormon to be president of the United States.” Dozier added that he expected his neighborhood to turn out for Romney. “Blacks are not going to vote for anyone of the Mormon faith,” he said. “The book of Mormon says the Negro skin is cursed.”

Santorum was apparently unavailable for comment—he was already en route to Coral Springs, with a quick stop at the nearby Coral Ridge Country Club.

UPDATE 2, Sunday, Midnight: Fort Lauderdale’s Sun-Sentinel has video of Santorum responding to reporters before he gave his stemwinder at the Worldwide Christian Center Sunday. Asked if he’d drop out after his third-place showing in South Carolina, he responded tersely: “Are you serious? I mean, this is, this race is just starting.”