On the campaign trial, Mitt Romney hammers home his marital history every chance he can get—he used his opening statement at Thursday’s debate to tout the fact he’s been married for 42 years, he lets his wife speak at campaign stops, and he’s incorporated the endearingly awkward story of how they met into his stump speech. But his campaign surrogates draw the line when it comes to attacking Newt Gingrich’s personal life.

After Romney’s rally in North Charleston on Friday afternoon, I asked Virginia Gov. Bob McDonnell, a Romney supporter and one of the party’s rising social conservative stars, whether voters should be concerned about recent comments made by Gingrich’s second ex-wife, Marianne. “Look, as far as I’m concerned, Newt has answered that question,” McDonnell said. “And that’s an issue for him to address. What people care about right now: They care about getting people back to work, getting the greatest country on Earth out of debt, and having the kind of leadership in Washington we can be proud of. And that’s really why we’re here supporting Mitt Romney, but all those other questions Newt can handle on his own.”

“All I’ll say is that everybody that I know…has made some mistakes in their life.”

But didn’t McDonnell, who railed against “alternative lifestyle living arrangements” in his master’s thesis, have any concerns about the reported open marriage? “That’s not what people are talking about in the campaign,” he said. “They’re talking about how we’re going to get people to get back to work. I think he handled it absolutely right. All I’ll say is that everybody that I know…has made some mistakes in their life. That’s up to an individual to deal with as they best see fit.” 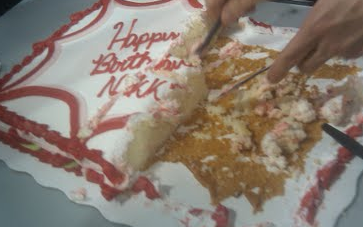 Romney let his supporters eat cake at a rally in North Charleston. Photo by Tim MurphyMcDonnell might be staying on message for the time being, but you don’t have too talk to many folks to realize that Newt’s marital woes really are something people are indeed talking about. “It shows that he’s untrustworthy,” said Bill Hardy of Summerville. “It’s unfortunate for him that it came out the way that it did [on national television]. But that actually drew me away from him. I can’t really trust him. I mean, don’t get me wrong, I think he’s a very smart guy.” Just not the kind you’d want in charge of the government.

The event itself was classic Mitt: The crowd was enthusiastic but not excessively so—certainly nothing like what you would see at a Gingrich event. Part of the blame might go on the band that opened for Romney, which warmed up the crowd with Fleetwood Mac’s “Landslide” and Bob Dylan’s “The Times They Are a Changing,” neither of which could rightly be considered conservative anthems. There also wasn’t that much of a crowd, considering this was the last day before the biggest primary to date. Romney’s campaign is the only one I’ve seen that actually tosses bundles of t-shirts into the crowd before he speaks—not because he’s such a celebrity that people are really craving them, but for the same reason minor league baseball teams do it: to keep people awake.

Romney hardly wavered from his usual routine (stump speech laced with obscure quotes from “America the Beautiful”), with a few exceptions. In what is believed to be a campaign first, he broke into song. At the start of his speech, Romney led the crowd in an off-off-key rendition of “Happy Birthday” in honor of Gov. Nikki Haley, who’d just turned 40, and invited supporters to stick around afterward for a celebratory treat. Perhaps it wasn’t the smartest of props; just two weeks after hitting President Obama for “Marie Antoinette” economic policies, the GOP front-runner was quite literally letting them eat cake.