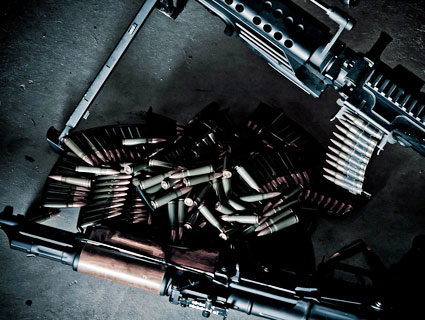 Perhaps you’ve heard of “Makin’ Thunderbirds,” a hard-bitten rock & roll song by Bob Seger that I listened to 30 years ago while in college. It’s about auto workers back in 1955 who were “young and proud” to be making Ford Thunderbirds. But in the early 1980s, Seger sings, “the plants have changed and you’re lucky if you work.” Seger caught the reality of an American manufacturing infrastructure that was seriously eroding as skilled and good-paying union jobs were cut or sent overseas, rarely to be seen again in these parts.

If the US auto industry has recently shown sparks of new life (though we’re not making T-Birds or Mercuries or Oldsmobiles or Pontiacs or Saturns anymore), there is one form of manufacturing in which America is still dominant. When it comes to weaponry, to paraphrase Seger, we’re still young and proud and makin’ Predators and Reapers (as in unmanned aerial vehicles, or drones) and Eagles and Fighting Falcons (as in F-15 and F-16 combat jets), and outfitting them with the deadliest of weapons. In this market niche, we’re still the envy of the world.

Yes, we’re the world’s foremost “merchants of death,” the title of a best-selling exposé of the international arms trade published to acclaim in the US in 1934. Back then, most Americans saw themselves as war-avoiders rather than as war-profiteers. The evil war-profiteers were mainly European arms makers like Germany’s Krupp, France’s Schneider, or Britain’s Vickers.

Not that America didn’t have its own arms merchants. As the authors of Merchants of Death noted, early on our country demonstrated a “Yankee propensity for extracting novel death-dealing knickknacks from [our] peddler’s pack.” Amazingly, the Nye Committee in the US Senate devoted 93 hearings from 1934 to 1936 to exposing America’s own “greedy munitions interests.” Even in those desperate depression days, a desire for profit and jobs was balanced by a strong sense of unease at this deadly trade, an unease reinforced by the horrors of and hecatombs of dead from the First World War.

We are uneasy no more. Today we take great pride (or at least have no shame) in being by far the world’s number one arms-exporting nation. A few statistics bear this out. From 2006 to 2010, the US accounted for nearly one-third of the world’s arms exports, easily surpassing a resurgent Russia in the “Lords of War” race. Despite a decline in global arms sales in 2010 due to recessionary pressures, the US increased its market share, accounting for a whopping 53 percent of the trade that year. Last year saw the US on pace to deliver more than $46 billion in foreign arms sales. Who says America isn’t number one anymore?

For a shopping list of our arms trades, try searching the Stockholm International Peace Research Institute database for arms exports and imports. It reveals that, in 2010, the US exported “major conventional weapons” to 62 countries, from Afghanistan to Yemen, and weapons platforms ranging from F-15, F-16, and F-18 combat jets to M1 Abrams main battle tanks to Cobra attack helicopters (sent to our Pakistani comrades) to guided missiles in all flavors, colors, and sizes: AAMs, PGMs, SAMs, TOWs—a veritable alphabet soup of missile acronyms. Never mind their specific meaning: they’re all designed to blow things up; they’re all designed to kill.

Rarely debated in Congress or in US media outlets is the wisdom or morality of these arms deals. During the quiet last days of December 2011, in separate announcements whose timing could not have been accidental, the Obama Administration expressed its intent to sell nearly $11 billion in arms to Iraq, including Abrams tanks and F-16 fighter-bombers, and nearly $30 billion in F-15 fighter jets to Saudi Arabia, part of a larger, $60 billion arms package for the Saudis. Few in Congress oppose such arms deals since defense contractors provide jobs in their districts—and ready donations to Congressional campaigns.

Let’s pause to consider what such a weapons deal implies for Iraq. Firstly, Iraq only “needs” advanced tanks and fighter jets because we destroyed their previous generation of the same, whether in 1991 during Desert Shield/Storm or in 2003 during Operation Iraqi Freedom. Secondly, Iraq “needs” such powerful conventional weaponry ostensibly to deter an invasion by Iran, yet the current government in Baghdad is closely aligned with Iran, courtesy of our invasion in 2003 and the botched occupation that followed. Thirdly, despite its “needs,” the Iraqi military is nowhere near ready to field and maintain such advanced weaponry, at least without sustained training and logistical support provided by the US military.

As one US Air Force officer who served as an advisor to the fledging Iraqi Air Force, or IqAF, recently worried:

“Will the IqAF be able to refuel its own aircraft? Can the Iraqi military offer adequate force protection and security for its bases? Can the IqAF provide airfield management services at its bases as they return to Iraqi control after eight years under US direction? Can the IqAF ensure simple power generation to keep facilities operating? Will the IqAF be able to develop and retain its airmen?… Only time will tell if we left [Iraq] too early; nevertheless, even without a renewed security agreement, the USAF can continue to stand alongside the IqAF.”

Put bluntly: We doubt the Iraqis are ready to field and fly American-built F-16s, but we’re going to sell them to them anyway. And if past history is a guide, if the Iraqis ever turn these planes against us, we’ll blow them up or shoot them down—and then (hopefully) sell them some more.

Well into my teen years, I was fascinated by military hardware. I built models of what were then the latest US warplanes: the A-10, the F-4, the F-14, -15, and -16, the B-1, and many others. I read Aviation Week and Space Technology at my local library to keep track of the newest developments in military technology. Not surprisingly, perhaps, I went on to major in mechanical engineering in college and entered the Air Force as a developmental engineer.

Enamored as I was by roaring afterburners and sleek weaponry, I also began to read books like James Fallows’s National Defense (1981) among other early critiques of the Carter and Reagan defense buildup, as well as the slyly subversive and always insightful Augustine’s Laws (1986) by Norman Augustine, later the CEO of Martin Marietta and Lockheed Martin. That and my own experience in the Air Force alerted me to the billions of dollars we were devoting to high-tech weaponry with ever-ballooning price tags but questionable utility.

Perhaps the best example of the persistence of this phenomenon is the F-35 Lightning II. Produced by Lockheed Martin, the F-35 was intended to be an “affordable” fighter-bomber (at roughly $50 million per copy), a perfect complement to the much more expensive F-22 “air superiority” Raptor. But the usual delays, cost overruns, technical glitches, and changes in requirements have driven the price tag of the F-35 up to $160 million per plane, assuming the US military persists in its plans to buy 2,400 of them. (If the Pentagon decides to buy fewer, the cost-per-plane will soar into the F-22 range.) By recent estimates the F-35 will now cost US taxpayers (you and me, that is) at least $382 billion for its development and production run. Such a sum for a single weapons system is vast enough to be hard to fathom. It would, for instance, easily fund all federal government spending on education for the next five years.

The escalating cost of the F-35 recalls the most famous of Norman Augustine’s irreverent laws: “In the year 2054,” he wrote back in the early 1980s, “the entire defense budget will [suffice to] purchase just one aircraft.” But the deeper question is whether our military even needs the F-35, a question that’s rarely asked and never seriously entertained, at least by Congress, whose philosophy on weaponry is much like King Lear’s: “O, reason not the need.”

But let’s reason the need in purely military terms. These days, the Air Force is turning increasingly to unmanned drones. Meanwhile, plenty of perfectly good and serviceable “platforms” remain for attack and close air support missions, from F-16s and F-18s in the Air Force and Navy to Apache helicopters in the Army. And while many of our existing combat jets may be nearing the limits of airframe integrity, there’s nothing stopping the US military from producing updated versions of the same. Heck, this is precisely what we’re hawking to the Saudis—updated versions of the F-15, developed in the 1970s.

Because of sheer cost, it’s likely we’ll buy fewer F-35s than our military wants but many more than we actually need. We’ll do so because Weapons ‘R’ Us. Because building ultra-expensive combat jets is one of the few high-tech industries we haven’t exported (due to national security and secrecy concerns), and thus one of the few industries in the US that still supports high-paying manufacturing jobs with decent employee benefits. And who can argue with that?

The Ultimate Cost of Our Merchandise of Death

Clearly, the US has grabbed the brass ring of the global arms trade. When it comes to investing in militaries and weaponry, no country can match us. We are supreme. And despite talk of modest cuts to the Pentagon budget over the next decade, it will, according to President Obama, continue to grow, which means that in weapons terms the future remains bright. After all, Pentagon spending on research and development stands at $81.4 billion, accounting for an astonishing 55 percent of all federal spending on R&D and leaving plenty of opportunity to develop our next generation of wonder weapons.

But at what cost to ourselves and the rest of the world? We’ve become the suppliers of weaponry to the planet’s hotspots. And those weapons deliveries (and the training and support missions that go with them) tend to make those spots hotter still—as in hot lead.

As a country, we seem to have a teenager’s fascination with military hardware, an addiction that’s driving us to bust our own national budgetary allowance. At the same time, we sell weapons the way teenage punks sell fireworks to younger kids: for profit and with little regard for how they might be used.

William J. Astore, a retired lieutenant colonel (USAF), is a TomDispatch regular. To listen to Timothy MacBain’s latest Tomcast audio interview in which Astore discusses the thrill of weaponry in pop culture and how it faded for him, click here, or download it to your iPod here. He welcomes reader comments at wjastore@gmail.com. Follow TomDispatch on Twitter @TomDispatch and join us on Facebook. To stay on top of important articles like these, sign up to receive the latest updates from TomDispatch.com here.