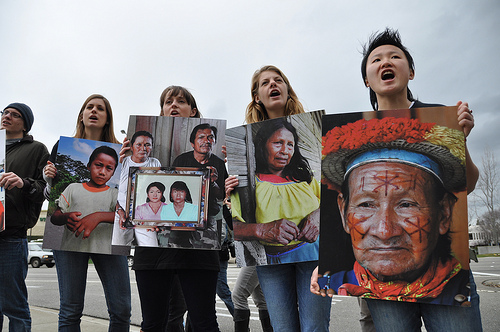 Protesters hold photos of Ecuadorians outside of Chevron's headquarters in California. <a href="http://www.flickr.com/photos/rainforestactionnetwork/5448819841/sizes/m/in/photostream/">Rainforest Action Network</a>/Flickr

In the past few weeks, there have been several developments in the ongoing lawsuit that Ecuadorian communities have filed against Chevron for polluting the Amazon. On Jan. 4, an appeals panel in the country sided with the communities and upheld the $18 billion judgment previously leveled against the oil giant. But the case is probably still far from over, as the plaintiffs will now need to find a way to actually enforce that decision.

This case started back in 2003, though the legal challenges date back to 1992. That’s when the plaintiffs in the case—a group of indigenous Ecuadorians—first brought forward their complaint that the oil company Texaco had dumped 16 billion gallons of heavily polluted waste water into the Amazon over the previous three decades. Chevron acquired Texaco in 2001, which is why the company is now the subject of the complaint, and claims that its subsidiary “fully remediated its share of environmental impacts” before 1992.

The case has dragged on for years now, with all kinds of drama. That’s included alleging that the plaintiff’s aren’t real, and then accusing the same not-real plaintiffs of racketeering in a US court under anti-organized-crime laws. The plaintiffs have dug up evidence of espionage and “dirty tricks” on Chevron’s part. Last February, a court in Lago Agrio, Ecuador ordered Chevron to pay $18 billion in damages. And on Jan. 3, an appellate court upheld that ruling. There will still be a drawn-out legal battle over the money, however, as Chevron no longer has assets in Ecuador. The plaintiffs will have to take their case to another country where Chevron does have assets and get a court there to enforce the ruling.

Meanwhile, both sides are still raising complaints about malfeasance. Among the documents turned over by Chevron in one of the many cases, the plaintiffs’ lawyers unearthed one (Exhibit F) that they believe shows that Chevron was gaming the soil testing that the company used in court to show that it had already cleaned up site. An internal document outlining Chevron’s testing protocol notes that sampling points should be selected “to emphasize clean points around pits when possible.” Another part of the document explicitly directs that soil samples from the perimeter of oil production stations that have already “shown to be clean” in a pre-inspection visit to the site. This document differs from what the one the company used in court to detail their testing procedures (Exhibit H). The plaintiffs publicly called on some of the experts involved in the sampling to recant.

In response to that most recent allegation, Chevron’s lawyers accused the plaintiffs of “intimidating and threatening” their witnesses and called the claim “false and misleading” in a letter to the plaintiffs’ legal team.

What’s clear is that this case probably isn’t going to wrap up anytime soon, despite the most recent ruling. Chevron maintains that the “politicization and corruption of Ecuador’s judiciary” should render the decision null. (Even though it was Chevron that sought to move the case there in the first place.) Instead, the company wants the courts to go after the plaintiffs. “Chevron does not believe that the Ecuador ruling is enforceable in any court that observes the rule of law,” said Justin Higgs, a Chevron spokesman. “The company will continue to seek to hold accountable the perpetrators of this fraud.”

But the plaintiffs say Chevron is just trying to deflect blame. “They’re trying to paint the Ecuadorians and anyone associated with Ecuadorians as corrupt,” said Karen Hinton, the spokeswoman for the plaintiffs. “In their minds that was the only way they’d get out of this.”