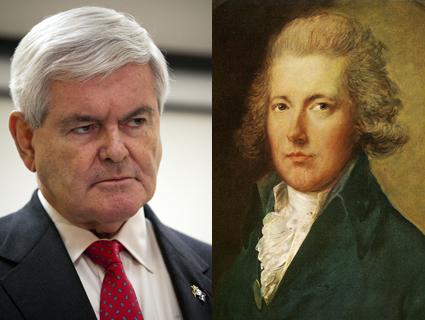 Newt Gingrich had been Speaker of the House for all of six days in 1995 when he made a triumphant appearance at DC’s Mayflower Hotel to give a major address entitled “From Virtuality to Reality.” It was Gingrich distilled to his concentrated essence, interspersing musings on Americans’ conception of speed limits, the merits of creating a federal entitlement for laptops (it would be “dumb”), the Wealth of Nations, and the works of the futurist power-couple Alvin and Heidi Toeffler. It was conservatism at its most Newt Agey: “Virtuality at the mental level is something I think you’d find in most leadership over historical periods,” Gingrich told his audience.

I think equally useful is to look at the role of Pitt the Younger in the 1780s and 1790s. Because Pitt the Younger—surrounded by the disciples of Smith—rationalizes British tax policies to create the commercial environment in which so much wealth is made, the people are able to fight the Napoloeonic wars and Britain is able to carry virtually the entire financial weight of the alliance against Napoleon in a way that would have been literally impossible without Adam Smith’s intellectual ideas being transmitted into the tax policies of Pitt the Younger.

Whew, long sentence. Gingrich’s point was fairly straightforward, though: Pitt the Younger had the ability to look at the big picture rather than simply the task at hand; think big thoughts; and then apply those big ideas “directly to the modern world.” It was a quality Gingrich considered seriously lacking in most politicians not named Newt Gingrich.

But there was another side to Pitt’s reforms that Gingrich chose to downplay. Pitt paid for the Napoleonic wars by raising taxes. Specifically, he implemented the first-ever income tax—and not just any income tax, but a progressive income tax. Also, as Adam Gopnik points out, he was “probably gay.”