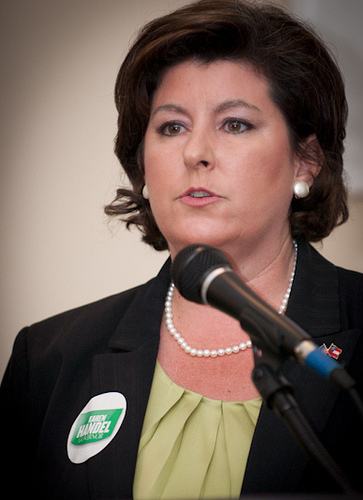 Karen Handel during her campaign for governor of Georgia. <a href="http://www.flickr.com/photos/richlacey/4831934237/sizes/m/in/photostream/">Rich Lacey</a>/Flickr

Karen Handel, the anti-abortion vice president for federal affairs at Susan G. Komen for the Cure who was reportedly behind the decision to end grants to Planned Parenthood, resigned from the group on Tuesday and acknowledged her role in ending the grants.

In a letter posted online and sent to the press, the former Republican candidate for Georgia governor both admitted her role in the controversy and denied that the decision had anything to do with “political beliefs or ideology.” She maintained that the decision was made because of a change in Komen’s grant priorities—repeating one of the many explanations Komen offered last week after the scandal erupted and before it retreated from its original announcement.

“What was a thoughtful and thoroughly reviewed decision—one that would have indeed enabled Komen to deliver even greater community impact—has unfortunately been turned into something about politics,” she wrote. “This is entirely untrue.”

Last week, Komen CEO Nancy Brinker explicitly denied that Handel had anything to do with pulling the plug on Planned Parenthood funding. “Karen did not have anything to do with this decision,” Brinker told MSNBC’s Andrea Mitchell. “This was decided at the board level and also by our mission.”

The full letter is below the fold, and Clara Jeffery has more on why Handel’s resignation isn’t enough.

Susan G. Komen for the Cure has been the recognized leader for more 30 years in the fight against breast cancer here in the US – and increasingly around the world.

As you know, I have always kept Komen’s mission and the women we serve as my highest priority – as they have been for the entire organization, the Komen Affiliates, our many supporters and donors, and the entire community of breast cancer survivors. I have carried out my responsibilities faithfully and in line with the Board’s objectives and the direction provided by you and Liz.

We can all agree that this is a challenging and deeply unsettling situation for all involved in the fight against breast cancer. However, Komen’s decision to change its granting strategy and exit the controversy surrounding Planned Parenthood and its grants was fully vetted by every appropriate level within the organization. At the November Board meeting, the Board received a detailed review of the new model and related criteria. As you will recall, the Board specifically discussed various issues, including the need to protect our mission by ensuring we were not distracted or negatively affected by any other organization’s real or perceived challenges. No objections were made to moving forward.

I am deeply disappointed by the gross mischaracterizations of the strategy, its rationale, and my involvement in it. I openly acknowledge my role in the matter and continue to believe our decision was the best one for Komen’s future and the women we serve. However, the decision to update our granting model was made before I joined Komen, and the controversy related to Planned Parenthood has long been a concern to the organization. Neither the decision nor the changes themselves were based on anyone’s political beliefs or ideology. Rather, both were based on Komen’s mission and how to better serve women, as well as a realization of the need to distance Komen from controversy. I believe that Komen, like any other nonprofit organization, has the right and the responsibility to set criteria and highest standards for how and to whom it grants.

What was a thoughtful and thoroughly reviewed decision – one that would have indeed enabled Komen to deliver even greater community impact – has unfortunately been turned into something about politics. This is entirely untrue. This development should sadden us all greatly.

Just as Komen’s best interests and the fight against breast cancer have always been foremost in every aspect of my work, so too are these my priorities in coming to the decision to resign effective immediately. While I appreciate your raising a possible severance package, I respectfully decline. It is my most sincere hope that Komen is allowed to now refocus its attention and energies on its mission.