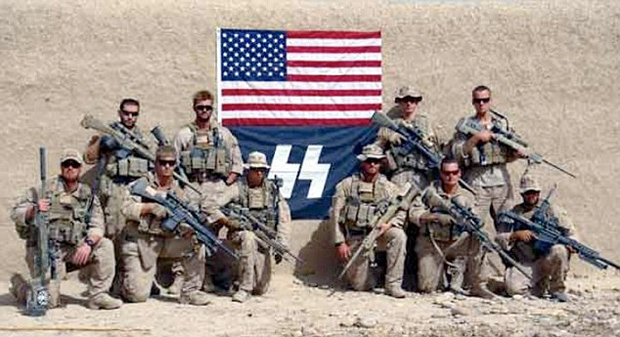 The Marine Corps’ scout snipers in Afghanistan could probably use a safety stand-down. Just weeks after news broke that one elite unit of the forward-deployed Marines urinated on the corpses of dead Afghans, a photo has surfaced of another unit posing proudly beside a flag of the Nazi’s killer SS troops. The Marine Corps Times reports:

The stylized “SS” logo appeared in a photograph of the platoon taken in September 2010 in Sangin district, Afghanistan, a hotly contested area in Helmand province. The Marines were with 1st Reconnaissance Battalion, out of Camp Pendleton, Calif.

The I Marine Expeditionary Force inspector general based at Pendleton was made aware of the “SS” flag photo in November of last year, said Capt. Gregory Wolf, a spokesman at Marine Corps headquarters. The issue has been addressed with the Marines involved, Wolf said. He did not say what specific action was taken beyond ordering Marines to stop using the logo.

The photo in question is not the only one documenting usage of the logo: A second image (embedded below) shows the SS logo emblazoned on a Marine’s rifle. The Marines’ story is that the unit used the flag “to identify the Marines as scout snipers, not Nazis.” The symbolic appropriation may indeed be unwitting, but witlessness is no more desirable a trait in downrange warriors than malice is.

Why is this making news now? Several Marines who were concerned about the photos contacted Mikey Weinstein (no relation), president of the Military Religious Freedom Foundation, a nonprofit that watchdogs religious intolerance in the armed services. Their behavior, Weinstein told me, “eviscerates good order, morale, and discipline,” in addition to angering non-Americans and alienating survivors of the Nazis’ atrocities. He published the photos on the foundation’s website and sent a letter to Gen. John Amos, the Marine Corps commandant, demanding punishment for the Marines involved. “That flag symbolizes the vile ideology of Hitlerian fascism and sends a menacing signal to religious minorities within the United States armed forces,” Weinstein said.

Walter Plywaski, a survivor of the Lodz ghetto and Auschwitz concentration camp in World War II who later became a US citizen and Air Force veteran, expressed disgust at the Marines’ behavior. “The photographs below roil my intestines and break my heart beyond words to express,” he wrote in an email to Weinstein. “I wish I could really believe that these sniper teams innocently combined the view of the United States flag with the central symbol of the murderous SS!”

The Corps says the matter has already been handled internally. “Certainly, the use of the ‘SS runes’ is not acceptable and Scout Snipers have been addressed concerning this issue,” Marine Capt. Brian Block told Politico in a statement today. 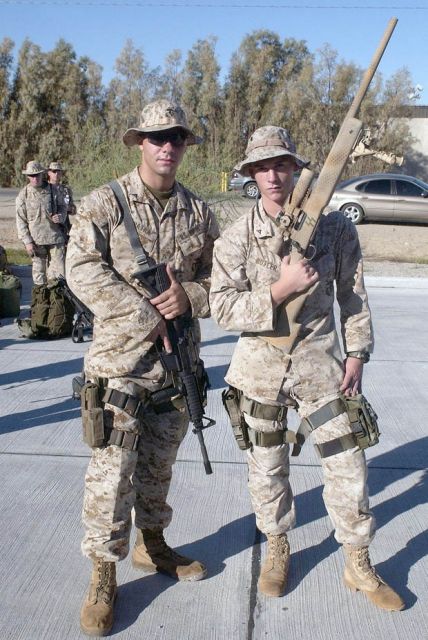