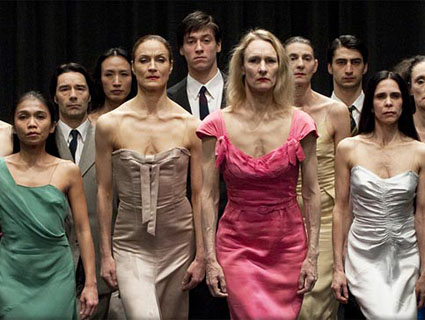 Pina, nominated for this year’s Documentary Feature Academy Award, is a 3-D tribute to famed post-Expressionist German choreographer Pina Bausch. The film teeters somewhere between a documentary and a performance, structured by interpretations of four of Bausch’s most famous dances. I went into the film knowing nothing about the choreographer, and barely anything about dance, but somehow that didn’t matter—it hooked me straight away.

Bausch (who died two days before the start of filming in 2009) was famous for popularizing a form of dance called “Tanztheater,” or dance theater—a style characterized less by grace and athleticism than for merging strong elements of drama and movement. However, she was equally known (and quite controversial) for her unsettling depictions of overtly sexual, violent, and sometimes grotesque interactions between men and women (the New Yorker once dubbed it “theatre of cruelty”.) Director Wim Wenders immediately confronts us with this aspect of her art in the film’s opening sequence, a haunting rendition of Bausch’s famous “Rite of Spring.” Women run around the dirt-covered stage in clusters, groping themselves and their clothing as if distressed by their own physical forms, while one woman writhes face-down on a crimson cloth. As a group of men stalk hungrily onstage, the women suddenly form a mass and begin violently beating down in a primal and possessed synchrony. In keeping with Stravinsky’s original, one woman eventually sacrifices her body to the men, dancing to her own death.

The film’s version of “Rite of Spring” stays fairly true to Bausch’s original, but some of the other sequences are more loosely based interpretations of dances she choreographed for the stage. One advantage of seeing these pieces in film, however, is the camera’s freedom, which allows us to more personally know the dancers’ faces as well as the fine movements of their bodies. Each of the four pieces are interspersed with sustained portrait-like shots of the individual performers—all of whom danced under Bausch at some point since her choreographic debut in 1968—staring nakedly at the camera, dubbed over with their recollections of Bausch as a person and creator. (As a choreographer, Bausch seemed to offer very little concrete direction to her dancers, preferring baffling and vague requests such as asking them to dance like “the moon” or scare her.)  The dancers traveled from all over the world to perform in Bausch’s company, and since they come from all stages of her long career as a choreographer, they range from young to old and able-bodied to shrinking—but all tell a (sometimes frustratingly) similar tale of falling under Bausch’s artistic spell.

?But perhaps the most conspicuous element of watching the dances on film is seeing such intense motion in 3-D. The technique may be becoming more ubiquitous (one of the trailers before the film was for an epically restored 3-D version of Titanic set to Celine Dion’s famed crooning), but it especially suits a movie so closely focused on the physicality of its subjects. The four pieces featured in the film take place on and off a traditional stage—some sequences are performed on subway cars, sweeping hilltops, busy intersections, and ethereal forests in northwest Germany, where Bausch’s dance company was located. Wenders says, of his decision to shoot the film 3-D: “Even if you use a hand-held camera and are among the dancers, you’re still outside.” With 3-D, he explains, he was able “to work in their own element.” Merged with black-and-white shots of Bausch’s own vigorous yet fragile frame dancing, the effect is a poignant impression of her vision of bodily movement.??

“What are we longing for? Where does all this yearning come from?” one of the dancers recalls Bausch asking him. Though you get nothing of her personal life or history in the film, it is clear that this is the central question of the choreographer’s work—and moviegoers are bound to leave with a glimpse of Bausch’s very singular artistic yearning. For those familiar with her, the film will serve as a fitting tribute; for those as wide-eyed as I was, the film will likely leave you wanting to know much more about Pina Bausch.