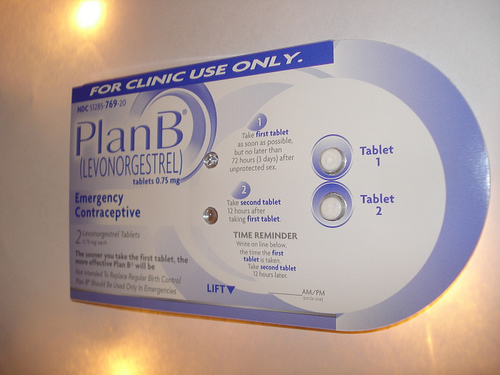 On Monday, Mitt Romney joined the conservative outcry over the Obama administration’s decision to require health insurers to cover birth control, denouncing the decision and decrying the requirement to cover “abortive pills” at a rally in Colorado.

“I’m just distressed as I watch our president try and infringe upon our rights, the First Amendment of the Constitution provides the right to worship in the way of our own choice,” Romney told the crowd, via ABC News. He’s referring, of course, to the administration’s recent decision to limit the exceptions to the new birth control rule to churches and other places of worship, rather than exempting any organization affiliated with a religion.

“This same administration said that the churches and the institutions they run, such as schools and let’s say adoption agencies, hospitals, that they have to provide for their employees free of charge, contraceptives, morning after pills, in other words abortive pills, and the like at no cost,” Romney continued. “Think what that does to people in faiths that do not share those views. This is a violation of conscience.”

Romney elided some key facts about the birth control rule. Institutions with a primarily religious mission are exempted from the law. No doctors will be required to provide birth control. No one who believes that birth control is a sin be required to use it. The law is designed to ensure that access to preventative care is not denied to women who want or need it.

But let’s deal directly with the “abortive pills and the like” line. What Romney is referring to isn’t an “abortive pill”—it’s Plan B, also known as the Morning After pill. Although anti-abortion groups might claim that the pill is “abortive,” medical science does not back up that claim. Plan B is a heavy dose of the type of hormones in regular-old-birth-control. It is designed to either prevent ovulation or to prevent a fertilized egg from implanting in a woman’s uterus (depending on where the woman is in her menstrual cycle). Medical organizations like the National Institutes of Health and the American College of Obstetricians and Gynecologists have clearly affirmed that pregnancy does not begin until a fertilized egg is implanted. Plan B thus cannot be an “abortive pill” as Romney and others claim.

The remark puts Romney in line with the more extreme anti-abortion groups that believe fertilized eggs should be guaranteed the same rights as adult humans. The GOP front-runner has long tried to have it both ways when it comes to the question of whether “personhood”—and all the rights that comes with it—begins at the point when a sperm meets an egg. Although Romney has repeatedly turned down offers to appear at events hosted by Personhood USA, the national group behind the spate of so-called “personhood” measures, he’s still flirting with the group’s views on the topic—views that would effectively make all hormonal contraception illegal.