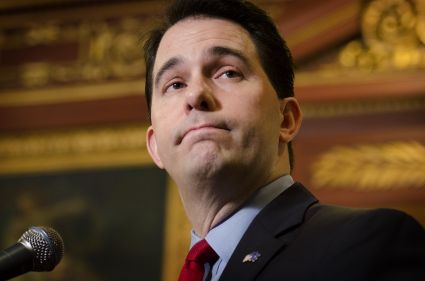 This explainer has been updated with new developments in the John Doe investigation, including a guilty plea by a former Walker aide. Click here to jump to those details. For background on the probe, keep reading.

A “John Doe” investigation launched in May 2010 has embroiled former Walker staffers and appointees from his time as Milwaukee County executive, his job before winning the governorship in November 2010. The investigation, led by Milwaukee County District Attorney John Chisholm, has led to home raids targeting former staffers with close ties to Walker and numerous felony charges for election law violations, embezzlement, and misconduct in office.

Walker says he has “fully cooperated” and “will continue to cooperate” with the John Doe probe. The governor is confident he won’t be implicated, he told the Milwaukee Journal Sentinel last September, because he held himself to high standards learned from his parents. “Certainly, they got me to the rank of Eagle Scout, and I continue to have that kind of integrity,” he told the paper.

Here, “John Doe” doesn’t refer to one person. It is a secret legal proceeding akin to a grand jury investigation in which a prosecutor secretly gathers information on a number of individuals to find out if crimes were committed. A John Doe probe must be green-lit by a judge; in this case, according to court records, former appeals court judge Neal Nettesheim approved an investigation on May 5, 2010.

As part of a John Doe investigation, witnesses may be granted immunity from prosecution if they agree to testify under oath. If it’s learned that a witness didn’t tell the truth, however, he or she could face charges. Court records list six individuals who have been granted immunity in the investigation, including Cullen Werwie, Walker’s chief spokesman; Rose Ann Dieck, a fixture in Milwaukee County Republican politics; and Kenneth Lucht, a lobbyist for Milwaukee-based Wisconsin and Southern Railroad Co.

Why does the scandal matter?

The probe looms large over Walker at a time when he’s trying to defend himself for a well-organized, popular recall campaign to oust him from office. Walker raised $12.1 million in 2011, a chunk of which will fund ads arguing that he’s an honest, fair, job-creating governor. Yet the John Doe investigation could undermine Walker’s standing with the public, experts say. “It will already be a campaign issue but how much voters focus on it is yet to be seen,” notes Charles Franklin, a political scientist at the University of Wisconsin. “Certainly it is not what a candidate wants to be happening during an election.”

What has happened so far?

Here’s the blow-by-blow in the John Doe probe so far:

May 2010: A source close to the John Doe investigation says it was likely triggered by press reports that Darlene Wink, Walker’s constituent services coordinator for Milwaukee County, posted online comments on news stories in which she praised Walker and disparaged his opponents while on the job—that is, on the taxpayer’s dime. Wink resigned hours after the Journal Sentinel‘s Dan Bice learned of her frequent postings and questioned her about them. While at work on her county computer, Wink also allegedly organized a fundraiser for Walker (PDF) and wrote press releases for the Milwaukee County GOP.

The probe widened later that May. Prosecutors began looking at allegations that a Walker donor, Wisconsin and Southern Railroad Co. CEO William Gardner, violated state elections law with excessive donations to Walker’s gubernatorial campaign and by offering to reimburse employees who personally donated to the campaign. The news that John Doe prosecutors set their sights on Gardner’s Walker donations appeared in an April 2011 criminal complaint (PDF). (Gardner later pled guilty to violating election law; his railroad company paid a $166,900 fine.)

November 2010: A day before the November general election, the probe inched closer to Walker after investigators subpoenaed emails from his gubernatorial campaign.

September 2011: The John Doe probe burst into public view again in September 2011, when a dozen FBI agents raided the Madison home of Cynthia Archer, who was a high-ranking administrator for Walker when he was running Milwaukee County. Agents reportedly seized a hard drive and a box of unidentified items.

December 2011: Andrew Jensen, a real estate broker and Walker donor, was arrested in December for allegedly refusing to cooperate with prosecutors in the John Doe probe. He was not charged with a crime. (Jensen’s attorney, Patrick Schott, said he had no comment on the matter.)

January 5, 2012: In a bombshell announcement, investigators charged Walker appointees Tim Russell (PDF) and Kevin Kavanaugh (PDF) with embezzling $60,000 intended for a veterans support organization called Operation Freedom. (Russell’s attorney, Michael Maistelman, had no comment.) The staffers used the money to pay for vacations to Hawaii and the Caribbean, wedding parties, and pro-Walker campaign websites. In a strange twist, Russell’s boyfriend, Brian Pierick, was also caught by John Doe investigators and charged (PDF) for sending sexually-explicit text messages to a then-17-year-old high school student, among other things. (Warning: Pierick’s complaint contains graphic language. His attorney did not respond to a request for comment.)

January 26, 2012: Late last month, two more county staffers who worked for Walker were charged (PDF) with operating a secret email network within Walker’s office while he was Milwaukee County executive. The two employees, Darlene Wink (PDF) and Deputy Chief of Staff Kelly Rindfleisch (PDF), allegedly used the secret network to coordinate political fundraising for Walker and 2010 lieutenant governor candidate Brett Davis. Wink’s attorney, Peter Wolff, says Wink plans to plead guilty to the two misdemeanors outlined in the DA’s criminal complaint. Rindfleisch’s attorney, Franklyn Gimbel, says the DA’s felony charges are “a little heavy-handed” and that Rindfleisch will plead not guilty in the case. Gimbel added that he hopes to move the case out of Milwaukee County to Columbia County, in central Wisconsin, where Rindfleisch legally lives.

Walker has denied knowledge of Wink or Rindfleisch’s activities. But Walker critics seized upon an email of his included in the Rindfleisch criminal complaint as evidence that Walker may have known what was going on. The email, which is reproduced below, was sent soon after the Journal Sentinel revealed Wink’s on-the-clock politicking in May 2010. Walker sent it using his gubernatorial campaign email account; the recipient was Tim Russell (“her” is Darlene Wink):

Through her attorney, Wink stressed that Walker knew nothing about the political activities going on in his office. Walker spokeswoman Ciara Matthews said in a statement that Walker “expected everyone to follow the law and made that clear publicly and privately.”

Good question. Since John Doe probes are by definition secretive, it’s unclear what shoe will drop next. In late January, Walker agreed to meet with the Milwaukee County DA’s office, which had requested a meeting with Walker about the investigation. Walker also claimed to have hired two criminal lawyers for the meeting.

State Democratic and union officials say Wisconsinites will go to the polls to vote in Walker’s recall election in late April or early May. The exact date depends on legal challenges and how long GOPers want to draw out the process. Whether Milwaukee County DA Chisholm, who one knowledgeable source says is “frustrated” by the probe’s snail-like pace, will have closed the book on the John Doe by then is anyone’s guess.

UPDATE 1, Wednesday, Feb. 8, 11:13 a.m.: Darlene Wink, formerly an aide to Scott Walker in the Milwaukee County executive’s office, pled guilty to two misdemeanors resulting from work she did organizing fundraisers for Walker’s gubernatorial campaign while on the county clock. Wink will cooperate with investigators in the ongoing John Doe probe under her plea deal. Her sentencing will take place on May 15, with a maximum of six months in jail and $2,000 in fines.

UPDATE 2, Wednesday, Feb. 15, 12:28 p.m.: Reince Priebus, the Wisconsin-based chair of the Republican National Committee, said he knew nothing about the ongoing “John Doe” probe that has so far resulted in misdemeanor and felony charges against multiple former Walker aides.

Priebus was dragged into the 20-month investigation when a legal complaint against ex-Walker aide Darlene Wink, who pled guilty to politicking on Walker’s behalf while on the job as Milwaukee County’s constituent coordinator, featured an email from Wink to Priebus asking about organizing a fundraiser for Walker. Priebus told reporters he didn’t know Wink had tried to contact him until seeing the complaint against her. As for the John Doe probe itself, Priebus said all he knew about it was what he read in the news.

UPDATE 3, Friday, March 9, 5:40 p.m.: Gov. Scott Walker announced the creation of his own legal defense fund in connection with the John Doe probe that has so far resulted in criminal charges against former Walker aides when he was Milwaukee County executive. (For details on those charges, see above.)

Walker’s creation of a legal defense fund is the strongest sign yet that the governor may be directly implicated in the ongoing investigation, led by the Milwaukee County district attorney. As WisPolitics.com notes, Wisconsin law says that individuals may start a legal defense fund only if they’re under investigation or being charged for violating state campaign finance or election laws. Under state law, Walker can’t ask for contributions to the legal defense fund, but he can transfer campaign donations to the defense fund if the donor okays the transfer. In January, Walker’s recall campaign said it had raised $4.5 million between December 11 and January 17, and that it had more than $2.6 million on hand.

“For nearly two years, Milwaukee County officials have been examining issues related to former employees of the County. I have repeatedly pledged my cooperation with that inquiry. I also made it clear that no public money has been used, or will be used, to pay for the attorneys needed to review documents and assist me in cooperating.

“To fulfill my commitment, I have today formed a legal fund to pay for the expenses incurred in cooperating with the inquiry. The fund will operate in accordance with the Wisconsin law authorizing these accounts, which was passed almost 30 years ago.”

Michael Maistelman, a Milwaukee attorney who represents Democratic and Republican clients, says that from his reading of state law and Walker’s announcement, “One can only draw the conclusion that he’s being investigated or he’s being prosecuted.” However, Ciara Matthews, a spokeswoman for Walker’s recall campaign, told the Milwaukee Journal Sentinel: “We reiterate that Gov. Walker has been told that he is not a target of this investigation.”