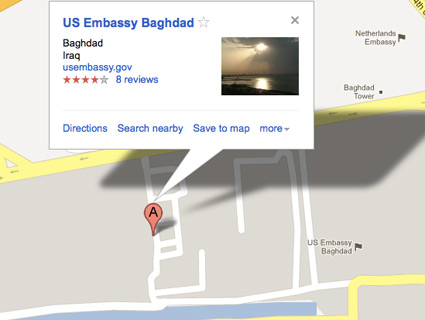 When the Iraq War officially ended late last year, many were quick to point out it was hardly a wholesale withdrawal. There are still 5,500 armed contractors stationed in Iraq to protect US government personnel (a figure nearly three times the number of hired guns the State Department uses to protect all its other diplomatic missions combined). A small (and controversial) fleet of surveillance drones are patrolling Iraqi skies. Oh, there’s also that huge embassy complex in Baghdad that was recently on track to balloon to an even greater size.

But as Tim Arango of the New York Times reported on Tuesday, the State Department might end up nixing as much as half of the 16,000-strong embassy staff:

The expansive diplomatic operation and the $750 million embassy building, the largest of its kind in the world, were billed as necessary to nurture a postwar Iraq on its shaky path to democracy and establish normal relations between two countries linked by blood and mutual suspicion. But the Americans have been frustrated by Iraqi obstructionism and are now largely confined to the embassy because of security concerns, unable to interact enough with ordinary Iraqis to justify the $6 billion annual price tag. …

Michael W. McClellan, the spokesman for the embassy…said in a statement, “over the last year and continuing this year the Department of State and the Embassy in Baghdad have been considering ways to appropriately reduce the size of the U.S. mission in Iraq, primarily by decreasing the number of contractors needed to support the embassy’s operations.”…McClellan said the number of diplomats—currently about 2,000—is also, “subject to adjustment as appropriate.” To make the cuts, he said the embassy, “is hiring Iraqi staff and sourcing more goods and services to the local economy.”

For years, State Department officials have been pushing for substantial cuts in diplomatic operations to accomodate the reduced American role in Iraq. Budgetary realities, the scrapped plans for a residual force of American troops, and animosity between Iraqis and the security contractors have also contributed to the growing downsize-fever.

Also buried in the Times story is this glorious nugget about a major “difficulty” facing the thousands of contractors and diplomats who remained in Iraq after the December drawdown:

Convoys of food that were previously escorted by the United States military from Kuwait were delayed at border crossings as Iraqis demanded documentation that the Americans were unaccustomed to providing. Within days, the salad bar at the embassy dining hall ran low. Sometimes there was no sugar or Splenda for coffee. On chicken wing night, wings were rationed at six per person. Over the holidays, housing units were stocked with Meals Ready to Eat, the prepared food for soldiers in the field.

Sometimes, when I was stuck on some godforsaken mountain in eastern Afghanistan, there was no sugar or Splenda for coffee. Or coffee.