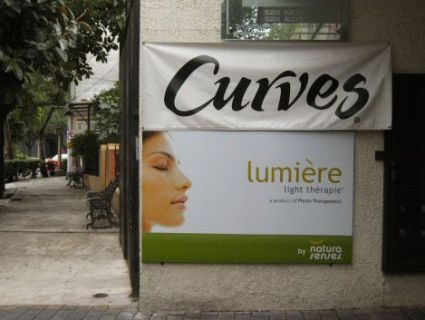 If you’ve been a strip mall anywhere in America lately, you’ve probably seen a Curves gym—the ladies-only fitness centers with the 30-minute circuit workout system. It’s well known that the franchise’s founder and CEO, Gary Heavin, has given to anti-abortion causes. So when the Office on Women’s Heath, a division of the Department of Health and Human Services, announced that it was teaming up with the ubiquitous chain to promote National Women’s Health Week this May, some in the reproductive rights community were none too pleased.

Curves, whose nearly 10,000 clubs around the globe make it the largest fitness franchise in the world, is listed as an official partner for the National Women’s Health Week, which runs May 13 (Mother’s Day) through 19. The partnership includes events to “educate and inform women on a variety of health and wellness topics” at Curves locations that HHS will promote on its website and its Facebook and Twitter feeds. Curves is also providing coupons for free one-month memberships to anyone who attends a NWHW events, and providing free publicity for the week in the franchise’s in-house magazine, Diane. The agreement also designates May 17 as “National Curves Day,” which HHS will promote in its materials.  (More details on the partnership are included in a memorandum of understanding between HHS and Curves International obtained by Mother Jones.)

Heavin, a born-again Christian, has been outspoken about his opposition to abortion over the years, and has given hundreds of thousands of dollars to organizations that support so-called crisis pregnancy centers that aim to discourage women from seeking abortions. “There’s nothing healthy about abortion,” he told Today’s Christian in a 2004 interview. “I’m not afraid to tell the truth.” He was also critical of abortion in an interview with Women’s eNews in 2004 that also noted Curves was one of the first companies to pull support from Susan G. Komen for the Cure over the grants it provides to Planned Parenthood for breast cancer screenings—an issue that’s been in the news quite a bit of late:

In 2002, however, Heavin flexed his financial muscle by pulling support for the Susan G. Komen Breast Cancer Foundation’s fundraising events, such as Race for the Cure, because he opposed the foundation’s support of Planned Parenthood. Heavin said he opposes abortion and groups that facilitate it because he believes abortion is unhealthy for women. He declined to discuss the potential ramifications for women’s health if abortion was not an option.

Curves also drew some attention in 2009 for partnering with the American Family Association’s radio programs, a pro-life and anti-gay group. (You can still buy the Curves Fitness CD via the AFA website.) Heavin lives next door to former President George W. Bush in Crawford, Texas, and he and his wife, Diane, are big supporters of Republican candidates. They gave a combined $50,000 to the National Republican Senatorial Committee in January 2012. Heavin also donated $30,800 to the Republican Senatorial Campaign Committee in December 2011, according to the Center for Responsive Politics. They’ve donated lavishly over the years as Curves grew from a Texas-based chain to “the McDonald’s of fitness centers,” as Gary has described it. The motto “No makeup, no men, and no mirrors” and ubiquity have made the chain popular in suburban America, though business has taken a hit in the recession.

“As women’s health and economic security is increasingly politicized, news of this HHS partnership with Curves, which is run by the anti-women’s health business leader, is extremely discouraging,” said Sara Finger, executive director of the Wisconsin Alliance for Women’s Health. She argued that the Obama administration should “look critically at the important partnerships that construct women’s health systems of care and information in the nation.”

A spokesman for the Department of Health and Human Services did not respond to a request for comment at press time.