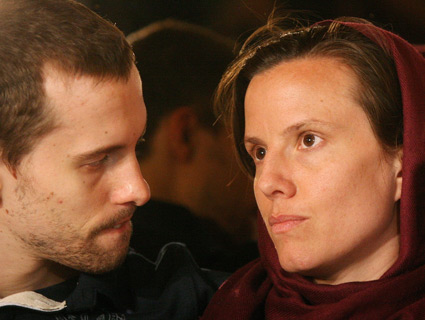 Sarah Shourd and Shane Bauer at a news conference in Tehran in May 2010.Ahmad Alabisaz/ZUMA

Sarah Shourd is one of three Americans who were imprisoned in Iran in July 2009, after they were arrested and charged with espionage while hiking on the border with Iraqi Kurdistan. Her two male companions, Shane Bauer and Josh Fattal, were jailed together, but Shourd was isolated in a 10-by-14-foot cell in Iran’s notorious Evin Prison, and held there for almost 14 months.

In September 2010, Shourd was released on humanitarian grounds, according to Iranian authorities, due to ill health. (Bauer and Fattal were released a year later.) Since returning home, Shourd has spoken out against the widespread use of solitary confinement in the United States, and has appeared in support of the inmates at Pelican Bay and elsewhere in the California prison system who recently engaged in a hunger strike to protest conditions in long-term solitary. Her op-ed on the subject appeared in the New York Times last November. I spoke with Shourd about her time in the hole, and why she has taken a stand on behalf of American prisoners.

Mother Jones: Are there parallels between solitary in Iran and the United States?

Sarah Shourd: There are parallels about solitary confinement everywhere. The really scary thing is that the US government and many governments were very critical of Iran for holding me in solitary for 13 and a half months, but when I got out I was shocked to find that the US had more people in solitary confinement than any other country—and in this country it is used routinely as an administrative practice, not as a very last resort. Which is how it should be used.

MJ: What was a typical day like for you? Could you discern the passing of time?

SS: My cell in Iran had a small window. I could tell passages of time by following the light across my room. It’s impossible to give you a snapshot of a typical day because in the time I spent there, conditions changed a great deal. I was 24 hours [in daily lockdown] the first four months, and then 23 and a half hours for the next two months, and then I was 23 hours for the majority of my time there, and the last month I was 22 hours. The point I want to make is conditions—solitary confinement, incommunicado, solitary detention—all these things are torture. Psychological torture. But there is a wide range of experience depending on whether you have books, whether you have access to medical care. A prisoner’s world depends on their conditions. And conditions in a cell are extremely important.

“I had really extreme panic attacks and lost control of myself, screaming or beating at the walls. I wouldn’t even know that I was the one who was screaming.”

MJ: In the US, most people in solitary are fed twice or three times a day, allowed to shower maybe three times a week, essentially put in dog runs for exercise, and are locked down 23 hours a day. How many times a day did you eat?

SS: Three times a day. It was decent, very repetitive, not a lot of fruit and vegetables. It was an open-air cell—open ceiling, high stone walls, and bars across the ceiling. [I could shower] usually every day.

MJ: Could you receive mail?

SS: Yes. But we were never allowed to write back. We read the letters we received. They were censored.

MJ: Describe the effect solitary confinement had on you.

SS: It’s extremely important to understand that humans are very social creatures, but when you don’t have access to human contact…The other thing about solitary is that it is very disorienting; I suffered from a lot of insomnia and extremely bad nightmares. I experienced distortions of reality, where I almost had hallucinations. I would see lights or hear sounds that I realized weren’t real. I also had to withdraw and detach myself to deal with the level of anxiety. The detachment manifested really in—there were times I had really extreme panic attacks and lost control of myself, screaming or beating at the walls. I wouldn’t even know that I was the one who was screaming until a guard came into my room and I would realize I had lost control. [I had] heart palpitations, headaches, a lot of physical symptoms.

MJ: What have been the lasting effects?

SS: Long term, it is hard to describe. But it had to do with reacting to free life. It was an incredible relief to actually be free and moving on with our lives. Picking up the pieces and figuring out how to move forward. A lot of times I experience things and react to them as if I were still in prison. It’s difficult to deal with the aftermath on a daily basis. I get very nervous in crowds. When I was in prison, the smallest sound would make me jerk and my heart would start to beat heavily and I would breathe heavily, and I dealt with that months and months after [my release]. Now it’s a lot less.

MJ: What would you say to American prisoners held in long-term solitary? Anything you learned about how to handle it?

“It’s torture. It’s inhumane. It’s degrading…And the US, as the worst violator, should take a leading role in eradicating solitary confinement.”

SS: Nelson Mandela said the time he spent in solitary confinement was the most dehumanizing experience. When I read that, I was horrified, but I also felt vindicated, because I think it is important for people in solitary to realize how brave they are and what incredible strength and coping mechanisms it takes to go through anything like this.

It’s torture. It’s inhumane. It’s degrading. And anyone who experiences this treatment will suffer the consequences and will have to heal. But one of the things that helped me, in solitary for over a year without trial or charges, was the belief I could get through it. And people who have spent so many decades in prison, their survival is testimony to all of humanity and to the strength and resilience of all of us.

It should be proscribed by the UN. And the US, as the worst violator, should take a leading role in eradicating solitary confinement. What’s been going on with the statewide hunger strike in California has really highlighted how horrific these conditions are. And the fact that these prisoners who are kept in solitary are no longer out of sight, out of mind, that we are hearing about them in the news, is extremely important and extremely hopeful.