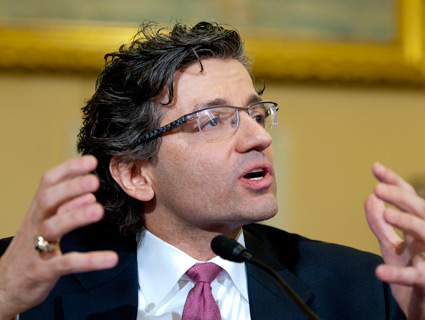 In early March, members of a Muslim group gathered for a press conference at Manhattan’s One Police Plaza to send a clear message to the New York City Police Department about its controversial surveillance program targeting Muslim Americans.

That message was: Thanks for spying on us.

“We are not here to criticize the NYPD,” declared Dr. Zuhdi Jasser, founder and president of the American Islamic Forum for Democracy (AIFD), who was joined by House Homeland Security chairman Peter King (R-N.Y.), “but rather to thank them for doing the work that we as Muslims should be doing, which is monitoring extremism, following extremism, and helping counter the ideologies that create radicalization in our communities.”

Jasser later said in an interview that he wanted to provide an alternative voice to the criticism of the NYPD coming from Muslim and civil liberties groups. “We just wanted the media reports to finally show balance, that there’s diversity, that some Muslims don’t have a problem with this.” Several news reports described attendance at the event as light.

An Arizona physician and Navy veteran, Jasser has lately become the right’s go-to guy when it comes to providing cover for policies or positions that many Muslim Americans contend are discriminatory. When controversy over the so-called Ground Zero mosque erupted, Jasser, a frequent guest on Fox News, accused the builders of trying to “diminish what happened” on September 11, 2001. He has supported statewide bans on Shariah law in American courts and has helped bolster conservative warnings that American Muslims seek to replace the Constitution with a harsh interpretation of Islamic law. “America is at war with theocratic Muslim despots who seek the imposition of Shariah and don’t believe in the equality of all before the law, blind to faith,” Jasser testified during hearings held by King’s committee last year on homegrown terrorism. There he also supported conservative allegations that many American Muslim organizations—and particularly the Council on American Islamic Relations (CAIR)—are Islamists seeking to “advance political Islam in the West.” Jasser sometimes refers to other Muslim organizations as “Muslim Brotherhood legacy groups.”

Many American Muslim groups, meanwhile, view Jasser as a reliable apologist for Republicans and anti-Muslim figures—one with little grassroots support in the American Muslim community. “He actually plays into the whole narrative that comes from the Islamophobia industry—that it’s not the extremists that are the problem, or Al Qaeda that’s the problem,” says Haris Tarin, director of the Washington, DC, office of the Muslim Public Affairs Council. “Mr. Jasser says that the Muslim American community, its institutions, and establishments are the problem. He might bring up some issues that are valid in terms of reform, but his approach is throwing the whole community under the bus.”

That assessment is shared by Jasser’s father-in-law, Dr. Ahmad Banna, who is the president of the Cleveland, Ohio chapter of CAIR—one of Jasser’s prime targets. “He thinks he’s speaking the truth, but he’s really attacking everybody,” Banna says. Jasser has been especially critical of CAIR for accepting donations from foreign sources.

Some critics of Islam on the right see Jasser as the great hope for Islamic reform. Glenn Beck has called him the “one Muslim that we were all searching for after 9/11.” Others say his views are unrepresentative. “Jasser’s Islam does not exist,” anti-Muslim activist Pamela Geller has opined.

Still, his politics have made him one of the few Muslim figures to whom conservatives are willing to extend the benefit of the doubt. Last year, Jasser spent an hour debating anti-Muslim writer Robert Spencer over whether Islam is inherently extremist at a retreat hosted by David Horowitz’s Freedom Center, whose websites are regular sources of anti-Muslim invective.

“The more Americans see [Muslims] reforming and countering radical ideas and political Islam, the more they’ll see that Islam is not the problem but rather part of the solution,” Jasser says.

Founded in 2007, Jasser’s group is not a membership organization, but he says that 2,500 people have signed up to receive AIFD’s literature. The group’s modest operating budget has grown steadily since its creation, reaching $200,000, according to its 2010 tax forms. In 2007, according to the Washington Post, Jasser received a $100,000 donation from Christian conservative financier Foster Friess, who is now bankrolling the super-PAC supporting Rick Santorum’s presidential bid. Jasser declined to elaborate on exactly how much Friess had given AIFD, though he said the financier contributed $70,000 to his organization in 2010 for a Muslim youth retreat hosted by the group. (Friess told MSNBC that he was backing Santorum because he is “incredibly versed in one of the number one issues of our time—and that is violent Islamic extremism.”)

Jasser says he is reluctant to discuss his group’s funding sources. “Many people donate anonymously because they get targeted,” he said. “I don’t want to publicly discuss with you things that are not public.” But he confirmed that his organization has received funding from groups often considered to have an anti-Muslim bent.

Jasser told Mother Jones that the AIFD had accepted $5,000 from the Center for Security Policy, which gave Jasser its “defender of the home front” award in 2008, to cover “security” costs for its recent New York event. Headed by Frank Gaffney, a Reagan-era Pentagon official, the center published a report in 2010 warning that American Muslims are seeking to replace the Constitution with a strict interpretation of Islamic law. The “expert” in Islamic religious law cited in the report, an attorney named David Yerushalmi, is responsible for authoring draft anti-Shariah legislation that has served as a blueprint for anti-Shariah laws across the US. Yerushalmi has suggested that “acting in furtherance of Islam” should be a felony.

According to a 2011 report by the Center for American Progress, Jasser’s group also received funding from the William Rosenwald Family Fund, which has given millions to organizations CAP describes as Islamophobic.

Jasser said his group has also received a one-time, unsolicited donation of $10,000 from the Clarion Fund, which is associated with Aish HaTorah, a right-wing Israeli group described by Jeffrey Goldberg of The Atlantic as “just about the most fundamentalist movement in Judaism today.”

The Clarion Fund has released several films that warn of Muslim conspiracies to reestablish a global caliphate. Jasser is a Clarion board member and in 2008 narrated a documentary bankrolled by the group called The Third Jihad, which darkly warns that Muslim extremists are attempting to “infiltrate and dominate America,” a conspiracy implicating most prominent American Muslim organizations. The New York Times reported that the film was shown to thousands of NYPD officers as part of their counterterrorism training, which the police department later apologized for. Jasser says that while he agrees with the message of The Third Jihad, “if I had done the film, I would have obviously spent more time on positive images of Islam and alternatives to political Islam.”

Jasser says his alliances with conservative and pro-Israel groups have earned him an array of threats from Islamic extremists, including a call on a jihadist-affiliated message board for his “organs to be torn asunder.”

The threats are a small price to pay, he says: “I’m doing this for my children; I want to have them have ideas that are rooted in American principles about the separation of mosque and state. We [Muslims] don’t have those ideas yet.”

But his critics say his brand of advocacy—and stunts like his pro-NYPD press conference—are overall harmful to American Muslims. “We will not allow our whole community to be put under suspicion just because we’re Muslim,” says Linda Sarsour, executive director of the Arab American Association of New York. “That wouldn’t go for any other community—and it should not go for ours.”