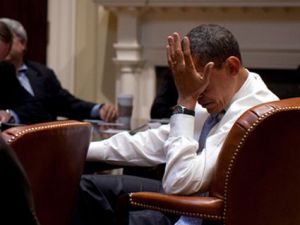 Solicitor General Donald B. Verrilli Jr. should be grateful to the Supreme Court for refusing to allow cameras in the courtroom, because his defense of Obamacare on Tuesday may go down as one of the most spectacular flameouts in the history of the court.

Stepping up to the podium, Verrilli stammered as he began his argument. He coughed, he cleared his throat, he took a drink of water. And that was before he even finished the first part of his argument. Sounding less like a world-class lawyer and more like a teenager giving an oral presentation for the first time, Verrilli delivered a rambling, apprehensive legal defense of liberalism’s biggest domestic accomplishment since the 1960s—and one that may well have doubled as its eulogy.

See our full coverage of the Supreme Court’s Obamacare hearings.

“What is left?” Justice Antonin Scalia demanded of Verrilli, “if the government can do this, what can it not do?” Verrilli’s response to this basic and most predictable of questions was to rattle off a few legal precedents.

Justice Samuel Alito asked the same question later. “Could you just—before you move on, could you express your limiting principle as succinctly as you possibly can?” Verrilli turned to precedent again. “It’s very much like Wickard in that respect, it’s very much like Raich in that respect,” Verrilli said, pointing to two previous Supreme Court opinions liberals have held up to defend the individual mandate. Where the lawyers challenging the mandate invoked the Federalist Papers and the framers of the Constitution, Verrilli offered jargon and political talking points. If the law is upheld, it will be in spite of Verrilli’s performance, not because of it.

The months leading up to the arguments made it clear that the government would face this obvious question. The law’s defenders knew that they had to find a simple way of answering it so that its argument didn’t leave the federal government with unlimited power. That is, Obamacare defenders would have to explain to the justices why allowing the government to compel individuals to buy insurance did not mean that the government could make individuals buy anything—(say, broccoli or health club memberships, both of which Scalia mentioned). Verrilli was unable to do so concisely, leaving the Democratic appointees on the court to throw him lifelines, all of which a flailing Verrilli failed to grasp.

“I thought what was unique about this is it’s not my choice whether I want to buy a product to keep me healthy, but the cost that I am forcing on other people if I don’t buy the product sooner rather than later,” said Justice Ruth Bader Ginsburg. Verrilli responded gratefully: “That is—and that is definitely a difference that distinguishes this market and justifies this as a regulation.”

Time and time again, conservative attorneys and judges fine-tuned their argument to fit existing legal precedent, arguing that the mandate was an unconstitutional use of Congress’ authority to regulate commerce because it forces individuals into the stream of commerce, rather than regulating economic behavior already underway. Former Solicitor General Paul Clement, who argued against the constitutionality of Obamacare, ably responded to questioning from the Democratic appointees on the court, all of whom offered more persuasive defenses of the mandate than the man who had come to the court to do so.

Most of the conservative appointees on the court appeared to sign on to the argument—advanced by Judge Henry Hudson in his decision striking down the mandate—that the individual mandate regulates economic “inactivity” rather than economic activity. That argument was designed by foes of the law to circumvent a previous opinion written by Scalia, where he wrote that “where Congress has the authority to enact a regulation of interstate commerce, it possesses every power needed to make that regulation effective.” Scalia seemed to sign onto Hudson’s reasoning during oral arguments.

“Here you’re regulating someone who isn’t covered,” Scalia said. “You are saying that some people who aren’t in [the insurance market] must be in it, and that’s different from regulating in any manner commerce that already exists out there.” Chief Justice Roberts, when asking questions of Verrilli, seemed to be speaking for himself. By contrast, when addressing the law’s opponents, he twice identified the government as the source of the counter-argument. Even Justice Anthony Kennedy, considered to be a potential swing vote, seemed open to the inactivity/activity argument. “The reason this is concerning is because it requires the individual to do an affirmative act,” Kennedy said.

Yet Kennedy appeared somewhat sympathetic to the government’s position that the health care market was unique, though he curtly observed that if upheld, he fully expected that the government would apply the mandate to other industries.

Verrilli was given five minutes for a final rebuttal and offered a stronger performance than he had in the previous hour he had been given.

“Everyone subject to this regulation is or will be in the insurance market,” Verrilli said. Citing the legendary Chief Justice John Marshall, he concluded that “the provisions of the Constitution needed to be interpreted in a manner that would allow them to be effective in addressing the great crises of human affairs that the framers could not even envision.”

It may not have been enough.