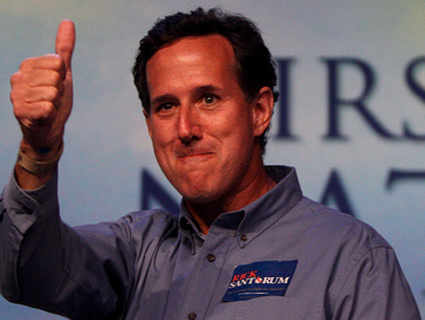 During his first US Senate campaign, Rick Santorum warned voters of a growing menace that was “breeding more criminals” and threatened to destroy America from within: single mothers.

“Most people agree a continuation of the current [welfare] system will be the ruination of this country,” Santorum told a town meeting in Clairton, Pa., in February 1994, according to transcripts of the appearance obtained by Mother Jones. “We are seeing it. We are seeing the fabric of this country fall apart, and it’s falling apart because of single moms.”

Santorum, who often trumpets his role in pushing through landmark welfare reform during stump speeches and debates, made the federal program a centerpiece of his 1994 race against incumbent Sen. Harris Wofford (D-Penn.). At his Clairton town hall, Santorum came prepared with a prop—a poster-size chart tracking the increase in the welfare rolls since 1965, alongside the increase in children who were born out of wedlock.

“Open up the current periodicals—study after study, article after article, children having children is destroying the fabric of our country,” Santorum said. “If you want to close your eyes to it, if you don’t care about it, if you don’t want to solve it, if you want to continue the system, to let people stay and spiral—go ahead. Not with me.” Single mothers, Santorum argued, needed politicians who weren’t afraid of “kicking them in the butt.”

It wasn’t just a matter of cutting government spending and playing life coach, though. One month later, at an appearance in Erie, Pa., Santorum framed welfare reform as a public safety issue. “What we have is moms raising children in single-parent households simply breeding more criminals,” he said. When Santorum wasn’t comparing single mothers to animals, he still pressed the issue of out-of-wedlock births and crime. He told the Philadelphia Inquirer in 1994 that “we will never solve the crime problem unless we solve the welfare problem. They are deeply intertwined.” (Santorum spokesman Hogan Gidley did not respond to a request for comment.)

Santorum, who as a second-term congressman described his views as “moderate,” made single mothers a focal point of his welfare policy. He introduced legislation that would have required single mothers who had been on welfare for more than two years to work at least 35 hours a week in order to receive benefits. They would also be denied benefits if they could not identify their child’s father. “If they don’t give the name, they don’t get any welfare,” Santorum told the Inquirer. Under his plan, which did not pass Congress, unwed teen mothers would not be eligible for welfare at all.

The solution to poverty, crime, and moral decay, he insisted, was to turn off the money spigots. “We have programs right now that pay children to have children,” he explained on the CNN’s Crossfire in 1994.

It wasn’t just single moms that came under assault from Santorum. He told his audience in Clairton that the welfare program’s ballooning costs were also due to “aliens,” “drug addicts,” and children “who have learning disabilities” as well. Santorum went on to suggest that cases of attention deficit disorder were being faked to bilk the government. “[Y]ou have a lot of testimony indicating that parents are coaching their children to stay in that situation in order to receive benefits,” he said.

Santorum has since toned down his broadsides against single mothers (if only slightly), but he’s singled them out during his presidential campaign. In October he told Family Research Council president Tony Perkins that single moms are “the political base of the Democratic party.” He continued, “Why? Because it’s so tough economically that they look to the government for help and therefore they’re going to vote. So if you want to reduce the Democratic advantage, what you want to do is build two-parent families; you eliminate that desire for government.”

In an effort to encourage people to get married, Santorum has proposed eliminating head-of-household exemptions for unmarried parents, while tripling their value for married parents. “We shouldn’t have incentives for people not to be married,” he said in October.

Even in his early years in Washington, Santorum conceded his rhetoric—and his policies—wouldn’t go over well with some audiences. “This approach can be described as ‘tough love,'” he said of his welfare reform proposal in 1996. “But the operative word is ‘love.'” He just had an odd way of showing it.