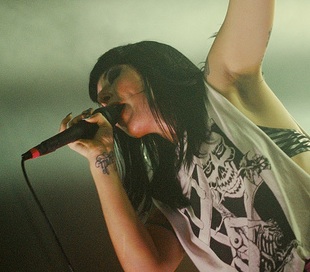 When Sleigh Bells burst onto the music scene in 2010 with their debut album Treats, there was nothing else that sounded quite like their mix of airy female vocals and aggressively distorted guitar, and they quickly won both a devoted following and critical acclaim within the realm of indie rock.

While there still isn’t anyone quite like Sleigh Bells out there, their aesthetic isn’t novel anymore, and while most sophomore albums face the challenge of maintaining a sound without simply copying it, the challenge in this instance is made particularly difficult by the distinctiveness of the sound in question.

Band members Alexis Krauss and Derek Miller seem to recognize this, because while Reign of Terror is immediately identifiable as Sleigh Bells, it’s a very different album. The heavy guitar and the breathy vocals are still there, but the songs are slower and less discordant; whether you think they pull it off or not probably depends on whether you think it’s for better or worse that screams are no longer used as punctuation. The only tracks that really match the raucous energy of Treats are “Comeback Kid” and “Demons.” Even “True Shred Guitar” doesn’t sound shreddy so much as carefully calibrated. (Which, of course, is another piece of the contrast at the heart of Sleigh Bells: the chaos of a punk show, but controlled as tightly as a cheerleading routine.) Reign of Terror is prettier, poppier, and likely more palatable than Treats’ convulsive clamor.

To be sure, the toning down of the Sleigh Bells aesthetic isn’t necessarily a bad thing: Melodies not only exist, but often sound gorgeous—an adjective seldom applied to their earlier work. And while the lyrics on Treats were mostly a self-referential vehicle for amping up the energy, Reign of Terror’s are more considered. The shift in tone isn’t simply an attempt to diversify their sound: The album title isn’t actually an allusion to the effect the songs might have on listeners, but rather a description of Miller’s state of mind while writing it—an emotionally volatile period brought on by his mother’s cancer and the recent death of his father in a motorcycle accident. Sure enough, beneath the bombast and brashly violent imagery are songs about death and vulnerability; while “introspective” also may not be a word you’d expect to associate with Sleigh Bells, they pull it off surprisingly well.

At a recent show at the Regency Ballroom in San Francisco, people in letterman jackets and cheerleader outfits—a reference to the cover of Treats and the “Infinity Guitars” music video—mingled with people in mohawks and studded leather. Volume is a not-insignificant factor in Sleigh Bells’ appeal, and the audio array was appropriately impressive: Six full 4×12 Marshall stacks constituted a literal wall of sound, enough to throw my hearing off for the next few days. Vocalist Krauss strutted about the stage in fishnets, torn jean shorts, and a leather jacket, flanked by Miller and guest guitarist Jayson Boyer; while previous tours relied largely on prerecorded tracks, this show was predominantly live, probably in part because the new album is more reliant on guitar.

The band’s entire catalog clocks in at just over an hour in its entirety, and they played close to all of it, kicking off with Reign of Terror opener “True Shred Guitar”—the album version, incidentally, starts off with the roar of a crowd. For all the subtle (well, more subtle) satisfaction of the new album, the immediate gratification of Treats is far better suited to a live show, and new tracks—”Road to Hell,” “Born to Lose,” “Crush”—served largely as breathers between bouts of belligerently energetic moshing to Treats favorites like “Infinity Guitars,” “A/B Machines,” and “Crown on the Ground.” But whether you love the new album or prefer their old stuff, Sleigh Bells puts on a terrific show. If you’re interested, here are the details on their upcoming tour.